Boks will be watching closely as Wales clash with All Blacks

Wales have won their last four matches against the Springboks in Cardiff. 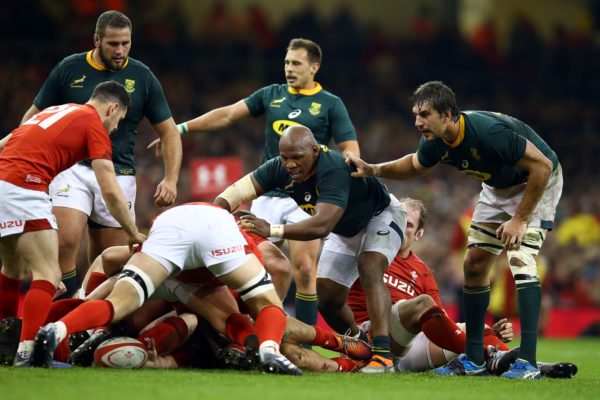 Springbok hooker Bongi Mbonambi waits for the ball to be cleared in South Africa's end-of-year Test against Wales in 2018. Picture: Getty Images

The Springboks will get some insight into the possible game plan Wales might institute against them when the hosts take on New Zealand at the Millennium Stadium in Cardiff on Saturday.

It will be an under strength Welsh side, with the match falling outside the International Test window, but they will throw everything they have at a strong All Blacks team and may show a bit of their hand ahead of the match against the Boks to follow.

“We will be keeping a close eye on the game. As players we have to analyse the Welsh side, so it will be a bonus for us to see this match,” said Springbok hooker Bongi Mbonambi.

“But we also have world class coaches who will do the main analysing of the Welsh team. It will be good to see how the All Blacks play against the Welsh side. It’s two quality sides playing against each other so it will definitely benefit us as a team to analyse them even more.”

The Boks have had a torrid time against Wales in Cardiff over the years and you would have to go back to 2013 to find their last win against the hosts at the Millennium Stadium.

Since then Wales have won their last four matches against the Springboks in Cardiff, though the Boks won their most recent clash in the semifinals of the 2019 World Cup in Japan.

“Wales is always a tough team to beat, especially when they are playing at home,” Mbonambi said.

“Our record against them in Cardiff hasn’t been the best. I know we beat them at the World Cup, but playing them at home they’re totally a different side.

“It’s never easy up here. It’s something we have spoken about in meetings and something we do look at but don’t really focus on.

“It’s a new season and a new end-of-year tour, and our record here is something we would like to rectify.”

The Boks have one more week of preparation ahead of the match against a well balanced Welsh side that will be back to full strength for the game, and the tourists will have to be at their best if they want to emerge with a positive result.

“They are a team that just doesn’t go away. They also have a good aerial game, their forwards are quite tough and they have a good backline, so we will definitely be put to the test,” said Mbonambi.

“But we still have the rest of this week and next week to make sure we put our ducks in a row and prepare for battle in Cardiff.”