The utility back normally plays at centre, but will be out wide this weekend, with Damian Willemse at fullback. 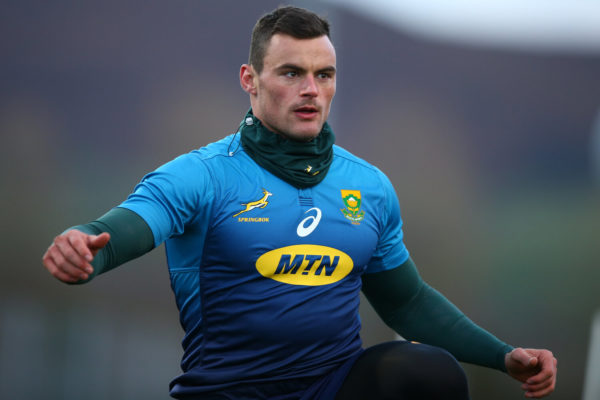 Jesse Kriel will play on the wing in the one-off Test against Wales on Saturday. Picture: Steve Haag/Gallo Images

Springbok utility back Jesse Kriel will be calling on all his experience when he gets a rare chance to start for the Boks as they take on Wales in their first game of their end of year tour at the Principality Stadium in Cardiff on Saturday.

Kriel with 48-caps to his name has been brought into the side on the right wing to add a bit of experience to the back three, after it was confirmed Willie le Roux would be sitting out and 14-cap Damian Willemse would be lining up at fullback, with 22-cap Makazole Mapimpi in his usual left wing berth.

So Kriel will be looking to fulfil a specific role for the side in the game against Wales.

ALSO READ: ‘Not an experiment’: Nienaber backs Kriel at wing for Boks

“We have guys like Lukhanyo (Am) inside me and Makazole, who is a great defensive organiser, and we take big pride in our defensive system at the Springboks,” explained Kriel.

“So I think just being able to be vocal and make the big defensive reads we want to make as a team all ties into the role that I have to play this weekend.”

Despite playing most of his rugby at centre, Kriel has featured a couple of times on the wing and claims that his preparation for either position remains largely the same in the build up and it is easy in the Bok set-up to adapt to different positions on the field.

“Our preparations don’t change much, as outside backs most of us in the team play in various positions, so we have a big focus on aerial skills,” said Kriel.

“Mzwandile Stick (attack coach) has been doing a great job with all of us outside backs right throughout our campaign, since way before the World Cup (2019) on aerial skills and things like that. It’s something we work hard at every day, so I think we are comfortable in playing wherever.

“I obviously enjoy playing my rugby at centre but I love it just as much playing on the wing. I just want to do whatever is best for the team, be able to deliver and just be on the field. I am very grateful for the opportunity on Saturday.”