"We did meet some of these players in the Lions series, but I think at the international stage it doesn’t matter who you are playing." 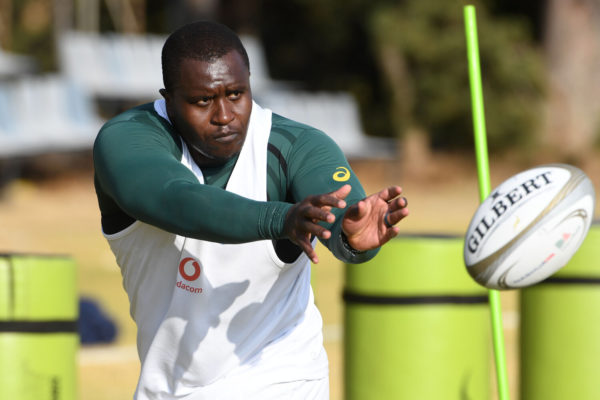 Trevor Nyakane will pack down at tighthead prop for the Springboks against Wales on Saturday. Picture: Lee Warren/Gallo Images

A personal battle is set to be waged on Saturday when the Springboks take on Wales in their first match of the end-of-year tour to the UK at the Principality Stadium in Cardiff.

Bok prop Trevor Nyakane believes that there will be plenty of motivation for both teams heading into the match without needing to bring back up what happened in the Lions tour earlier in the year, which a number of the Welsh squad was a part of.

“I think every time two nations meet it’s personal, even if we didn’t meet some of those players in the British and Irish Lions side and we were playing them all here for the first time,” said Nyakane ahead of the game. “I think they would bring the same energy, same physicality and just go as hard as they can at us.

“We did meet some of these players in the Lions series, but I think at the international stage it doesn’t matter who you are playing and whether you have played them before, it’s always going to be tough, they’re always going to give their all.

“We are all trying to play for our country and give our best, so I don’t know if that will be a motivating factor for them, but for us just playing for the green and gold jersey and representing South Africa is motivation enough.”

Nyakane will be lining up at his more favoured spot of tighthead prop for the match in the same front three that did battle in the Boks’ last game against the All Blacks, with Ox Nche at loosehead and Bongi Mbonambi between them.

The front row will thus be aiming to put in a massive shift and give their side front foot ball to play from, which will give the Bok backline a big boost in the match.

“Over the past few years I have been predominantly playing at tighthead while occasionally moving to loosehead when needed,” said Nyakane. “So I am a tighthead and I enjoy the position but for me it is all about the team.

“If the coaches want me at loosehead or tighthead I am happy either way and I will just look to deliver my all on the day.

“Springbok rugby is all about set piece dominance and physicality, so during the game that’s what we look to do and try get right, and it doesn’t matter who we play that’s always a focus point for us.

“In the end both sides are going to give it their all and it’s not going to be easy for anyone.”