‘If we dominate physically, the rest will sort itself out’ — Kriel

The Springboks haven't won in Cardiff against Wales in a number of years and are eager to correct that statistic. 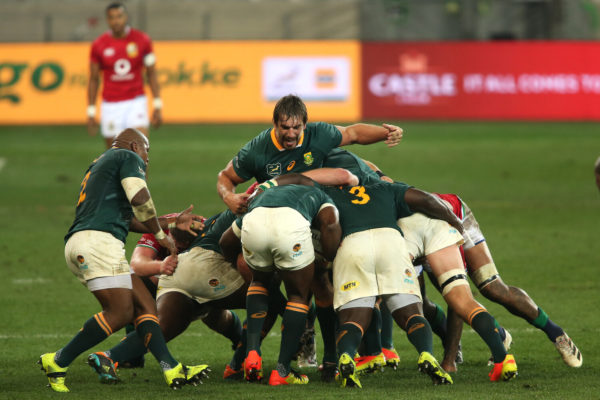 The Springboks will again look to dominate their opponents physically when they clash with Wales in Cardiff on Saturday. Picture MB Media/Getty Images

The Springboks will be looking to focus on getting their own game right when they take on Wales in their first game of the end-of-year-tour at the Principality Stadium in Cardiff on Saturday.

Utility back Jesse Kriel admits that the team has an idea what to expect from their opposition, but that their goal is to play their way and the result will work itself out.

“We always have an idea of what a team is going to bring and what their DNA is going into a game, but there is always that 20% that you don’t know what they are going to bring,” said Kriel.

“So I think it is more us focussing on our systems and doing things the way we want to, like dominating the physical part of things and then the rest will sort itself out.

“So it’s more a case of focussing on what we do well and forcing that on other teams.”

ALSO READ: Boks v Wales: Three things to look out for in Cardiff

The Boks head into the match having lost their last four encounters in Cardiff, with Kriel having been a part of the team that lost there in 2017 and 2018 and they will be eager to put those results right on the weekend.

“They were both close Tests and obviously different coaching staff back then, but they had a very simple game plan that they executed really well. We just didn’t handle it as well as we should have in those two games,” explained Kriel.

“So that’s something we are aware of and have worked hard on and I think we have also come a long way as a team. I think we are able to do that to teams now, so that is something we will be focussing on, on the weekend.”

The Boks also will be boosted by the fact that they have a close to full strength team available, with their last few meetings in Cardiff seeing under strength teams taking on the hosts.

“That is a big factor for us, it’s great to have the whole squad together and to keep that continuity going,” admitted Kriel.

“So I think everyone is excited for the game, it’s not going to be easy, it’s a massive Test match with two countries both wanting the same result, but we are very happy that we have good continuity going into the match.”