It was another typically tight game between the sides, with the only try of the game being scored by Malcolm Marx of South Africa. 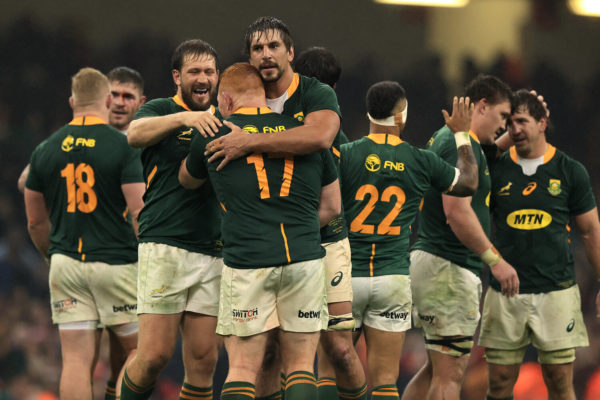 Eben Etzebeth embraces Steven Kitshoff and Frans Steyn of South Africa at the final whistle after the team's win against Wales in Cardiff on Saturday. Picture: David Rogers/Getty Images

The Springboks made hard work of it but ultimately prevailed 23-18 over Wales in a massively physical encounter at a wet Principality Stadium in Cardiff on Saturday night.

It was a battle of the kickers as Wales flyhalf Dan Bigger slotted six penalties and Bok flyhalf Handre Pollard responded with four of his own, while Frans Steyn and Elton Jantjies landed one each, but it was a late try to replacement hooker Malcolm Marx that made the difference in the end.

Going into the final 10 minutes of the match the hosts held a tight 18-15 lead over the visitors, when the Boks received a penalty out wide on the 22m line and instead of going for polls, kicked the ball onto the 5m line.

From the lineout the Boks set up the maul and powered it over the line with Marx dotting down an unconverted try at the back of it to put them ahead for the first time in the game at 20-18.

The final minutes of the match then saw the Bok put on a defensive masterclass, smashing the Welsh back into their own 22m and then earning a breakdown penalty on the stroke of fulltime which Jantjies popped over to add gloss to the scoreline.

At the start of the match the game kicked off with the Boks laying down an early defensive marker with some big hits as Eben Etzebeth hammered Dan Biggar twice and Lood de Jager also made a crunching tackle.

The scoreboard then got ticking in the 10th minute as a host of breakdown offences saw both teams trade penalties over the next eight minutes as Biggar put Wales ahead, before Pollard equalised with Biggar then putting Wales back in front and Pollard again levelling the scores at 6-all.

Two maul penalties then gave the Boks some good field possession in Wales 22m, but they were unable to capitalise as the hosts cleared.

In the 27th minute the Boks were again pinged at the breakdown on the 22m in front giving Biggar his third easy penalty to put the hosts back in front.

Both sides then had a prop each yellow carded for repeated infringements, first Ox Nche for obstruction in the 31st minute, with Biggar slotting the penalty for a 12-6 lead and then Rhys Carre in the 35th at a lineout.

On the stroke of halftime the Boks then got a penalty out wide, which Pollard superbly curled in to make it 12-9 at the break.

In the second half the sides again traded penalties, Biggar in the 51st minute after Jesse Kriel found himself isolated just over the 10m line and then Steyn nailed a monster 54m penalty from his own half in the 55th minute with the score 18-15.

The Boks then thought they had scored when an up and under from replacement scrumhalf Cobus Reinach was gathered by Etzebeth who put wing Makazole Mapimpi away, only for the ref to overturn the decision on review saying that the players did not retreat at the kick.

However it didn’t make much of a difference as the Boks soon found their way over the tryline to make sure of the win.