The performance of the Bok loose trio caught the eye, with Kwagga Smith putting in a barnstorming performance at blindside flank. 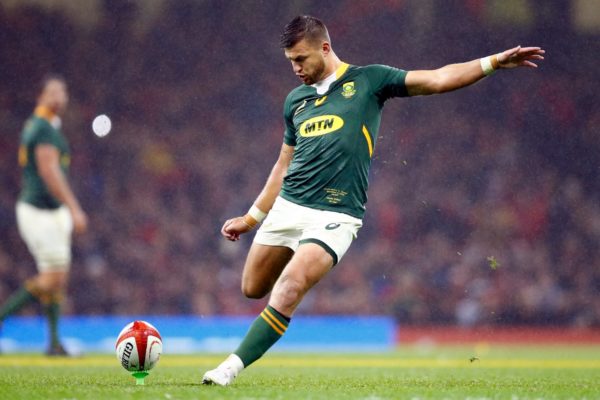 Handre Pollard kept the Springboks in the match for much of their clash against Wales. Picture: Steve Haag/Gallo Images

Springbok coach Jacques Nienaber was full of praise for the starting 15 that slowly sapped the energy of a fired up Welsh outfit and allowed the famed ‘bomb squad’ to finish off the match, giving South Africa a come from behind 23-18 win at the Principality Stadium in Cardiff over the weekend.

A massive kicking battle was waged during the first three quarters of the match, with Wales flyhalf Dan Biggar landing six penalties, and Bok flyhalf Handre Pollard slotting four and replacement fullback Frans Steyn one, as the home side led 18-15 going into the final 10 minutes.

The Bok pack then finally got their rolling maul going with reserve hooker Malcolm Marx dotting down what would be the decisive try with seven minutes to go, before replacement flyhalf Elton Jantjies added gloss to the scoreline with a penalty on the full-time hooter.

“I thought that the maul try was a big thing. Up in the coaches box we said that is probably the game, so hats off to the forwards for making that one happen,” Nienaber said.

“But I think a lot of people make reference to the bench that came on and the impact that they had, but sometimes one forgets the poison that the starting guys put into the legs of the opposition on the pitch.

“Every maul tanked energy, and even though we didn’t use our opportunities when we got 22-metre entries, it still takes energy to stop those mauls. So our bench and starters work in tandem and the foundation laid by the starters opened up opportunities for the guys that came on.”

The ageless Steyn was given a deserved Man of the Match award for his performance after coming on in the 15th minute for Damian Willemse who was concussed, but a number of players stood out for the Boks over the 80 minutes including lock Eben Etzebeth and outside centre Lukhanyo Am.

However, it was the performance of the Bok loose trio that particularly caught the eye, with Kwagga Smith putting in a barnstorming performance at blindside flank while slotting in well alongside his captain Siya Kolisi and eighthman Duane Vermeulen.

“We always try get a good combination in terms of the loose trio and that’s why sometimes in team selections people will question certain things, but it’s just to find the balance and I think that this is finally a good balance,” Nienaber explained.

“The players all have their specific roles that they play, including Pieter-Steph du Toit, and now I think Kwagga fits nicely into that.”

The Boks will now gear up for their next challenge on their end-of-year tour, as they head to Edinburgh to take on Scotland this weekend.