De Allende on Bok year: ‘We have grown, can hold our heads high’

The Springbok centre has spoken about the team's mixed fortunes in 2021, following a year of no rugby at all. 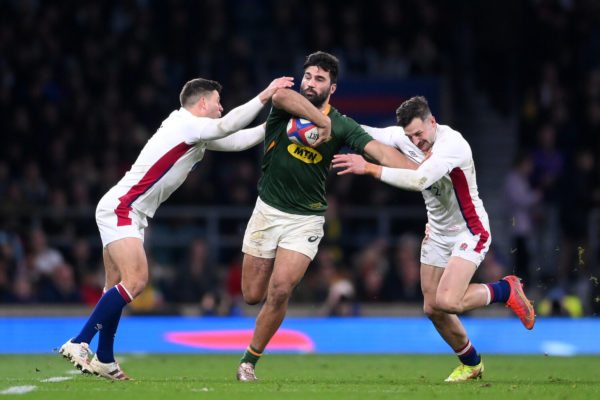 Damian de Allende of South Africa is tackled by Ben Youngs and Jonny May of England during the teams' Test at Twickenham on Saturday. Picture: Laurence Griffiths/Getty Images

The Springboks showed a different side of their game during their end-of-year-tour to the UK, with some exciting tries scored in their Test matches against Scotland, Wales and England.

Explosive flying left wing Makazole Mapimpi again caught the attention, with the Boks bringing a bit of razzle dazzle as they went to the wide channels a lot more than usual.

They created several good chances that they were just unable to convert, including one down the right wing with a pass from captain Siya Kolisi just behind right wing Jesse Kriel which could have ended with him going over as well (on Saturday, against England).

ALSO READ: ‘No excuses,’ says Kolisi after Twickers loss at end of tough 2021

Inside centre Damian de Allende has played a big role in the Boks’ improved attacking display and was involved in most of the action in the lead up to the tries that were scored.

“We did have opportunities (against England) that we didn’t take and I think when we watch this game again we will see that and know that we just need to execute a lot better.

“But I think we are on the right path. I think our decision making is getting a lot better. We are playing a lot more within ourselves and are not just reliant on the system and I think that’s where we have grown as a squad. Hopefully we will grow even more next year when we play together again.”

Despite having lost five of the 13 matches that they played this year, De Allende believes that it was a great year for the Boks, especially considering the tough conditions that they continually faced over a gruelling season.

“It has been a great year despite the results being a mixed bag. We lost a few on the trot but the way the squad has stuck together and carried on digging deep even through those tough times, it really shows that we do care for each other,” said De Allende.

“We have had a lot of challenges, but we can look back on it (the year) as a squad and hold our heads up high and smile at the memories we’ve made.”