With Siya Kolisi, Duane Vermeulen and Pieter-Steph du Toit likely to go to the World Cup in 2023, only two other loose forward spots will be available. 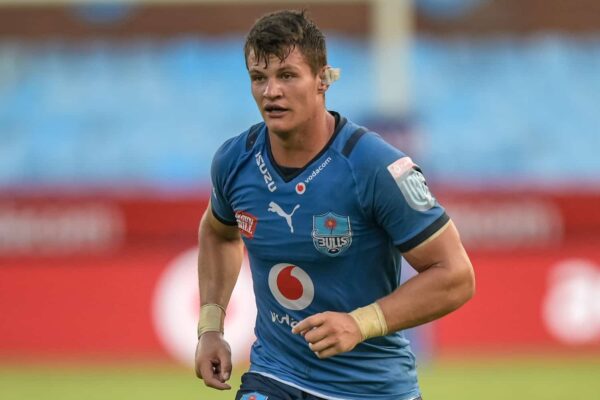 Elrigh Louw, the form Bulls loose forward, will have to wait for his turn to play for the Springboks. Picture: Getty Images

Rising loose forward stars Evan Roos and Elrigh Louw are unlikely to be a part of the Springbok plans ahead of the 2023 World Cup in France, according to Bok coach Jacques Nienaber.

Nienaber was speaking to the media on Sunday ahead of the first Springbok alignment camp of the year taking place in Durban this week, and was explaining why some players had been invited to the camp and others not.

He explained that these camps were mostly about getting aligned with players who the management were unfamiliar with, so there wasn’t always a need for some players to be a part of the camps.

However, it was his explanation of the Bok loose forward options for the coming World Cup that was very telling in that Roos and Louw would face a massive uphill battle to force themselves into the reckoning, with just five loose forward berths available for the event.

“We believe Duane (Vermeulen), Pieter-Steph (du Toit) and Siya (Kolisi) can all make France 2023, obviously without major injuries and as long as they keep playing as they have been,” explained Nienaber.

“Kwagga Smith joined us in 2019 and if he continues playing as he has been we believe he can make France 2023. Then last year we used Jasper Wiese and Marco van Staden. So that’s six loose forwards that we have predominantly used since 2018.

“Then due to having bigger squads last year due to Covid we also had the two Du Preez brothers (Jean-Luc and Dan), and if I now add Evan Roos and Elrigh Louw, who are the 22-year-old youngsters now pushing the older guys, that gives us 10 loose forwards.

Nienaber continued: “With us having our France 2023 hats on already there are 17 or 18 Test matches until we go into the World Cup. So if we utilise these 10 loose forwards and give them, let’s say four games to each, then we won’t be able to build into the World Cup.

“This isn’t saying that there aren’t going to be opportunities for Evan Roos, Elrigh Louw and the next guys that play well next year. This doesn’t shut the door on anybody, we are monitoring a lot of players.

“But we would (ideally) like a guy to have about 10 to 15 caps when he goes into a World Cup, because I don’t think you can expect a guy with under 10 caps to definitely perform in a World Cup final.”