Managing player output in the next few weeks will be crucial for the teams from Loftus Versfeld. 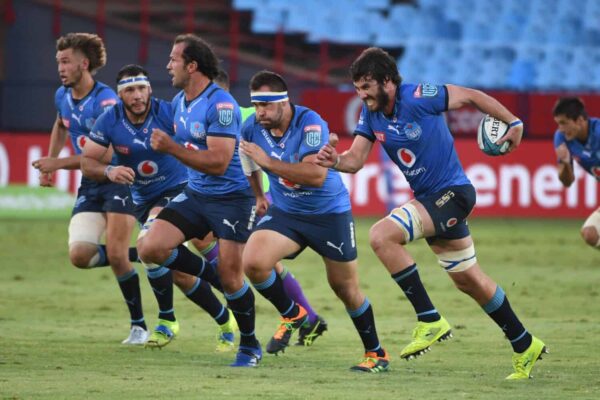 The Bulls will be fighting on two fronts in the next few weeks - in the URC and Currie Cup. Picture: Lee Warren/Gallo Images

The Bulls are likely to attack the next two weekends of Currie Cup action as hard as player management allows, but they will be hoping the Lions and Sharks follow suit as they can do the Loftus Versfeld team a massive favour over the next fortnight by beating back the charge of the Free State Cheetahs.

The Bulls are sitting at the top of the Currie Cup log at the moment, but they are just one point ahead of Free State, who have a game in hand.

While the Bulls are hosting Griquas at Loftus Versfeld on Saturday, the Cheetahs will be visiting the Lions at Ellis Park on Friday night. The Lions are bottom of the log and, given that they cannot make the URC playoffs anymore, they could well decide to focus on ensuring a better final position in the Currie Cup.

The Sharks then play Free State on May 14 and the Bulls would love them to take a strong team to Bloemfontein. But the Bulls host the Lions on the same weekend, before flying to the UK on the Monday (for a URC match), so that could be a pivotal game in their bid to top the Currie Cup log.

“We don’t know exactly what the other franchises are planning,” Bulls assistant coach Pine Pienaar said on Tuesday. “The Lions did really well in the URC at home, so maybe they want to end that competition on a high.

“They will show their hand with their selection against the Cheetahs this week, and then they could play the same side against us the following weekend. I would guess quite a few URC players would feature.

“I think there will also be URC players here and there in our team, although obviously some guys will be resting and there are a few players at the Springbok training group.

“We still see the Currie Cup as being very important, but all loading of the players has to be managed carefully. In some positions we don’t have as much depth, so we have to manage carefully when those guys rest,” Pienaar said.

Big calls will have to be made by head coaches Jake White and Gert Smal, and it is only going to get more complicated for the Bulls.

If the Bulls do win their URC quarterfinal on June 4 then they will advance to the semi-finals on June 11. That is the same day they are scheduled to play the Free State Cheetahs in Bloemfontein in the final round of Currie Cup action, in a match that could well decide who hosts the final.

The Currie Cup semi-finals then clash with the URC final on June 18, with the local final being played on June 25.