Revealed: When injured Duane and Frans will return to Boks squad

The injured Johan Goosen is spending time in camp to get accustomed to the national set-up. 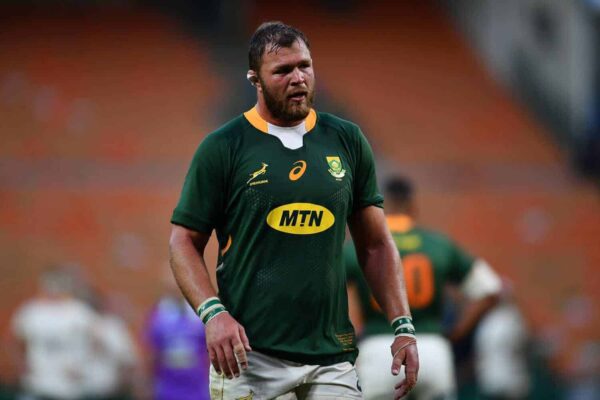 Injured Bulls flyhalf Johan Goosen is expected to return to the Springbok fold after the Rugby Championship, after he was surprisingly included in the squad named over the past weekend, despite him currently undergoing rehabilitation.

A number of other injured senior Boks were not selected, further muddying the waters, but coach Jacques Nienaber cleared that all up during a press conference on Tuesday afternoon, indicating that all are still in the team’s plans for the international season.

“Johan picked up his injury a while back and he is someone that we are looking at to cover at flyhalf, but he’s a guy we have never worked with before. So we thought it was a great opportunity seeing that our camp is in Pretoria to get him in,” explained Nienaber.

“We got him into the alignment camps and now while we are in camp we want him to see how we operate and how we work, so that was the thinking behind including Johan with us for these three weeks.

“When we move onto the Test matches in Bloemfontein, Cape Town and against New Zealand, he will stay with the Bulls and finish his rehab with them.

“He will then probably start the URC competition next season, which I think is after the final Rugby Championship match in September, with the Bulls and play a couple of games. If everything goes well and his performance is good he can then join us on the end of year tour.”

The major omissions from the squad were Duane Vermeulen, Frans Steyn and Cobus Reinach, with Vermeulen set to undergo knee surgery soon, Steyn is currently out with a hamstring injury and Reinach is still recovering after undergoing shoulder surgery just over a month ago.

Despite this, all of the players are expected to play a part over the season, should they recover in time and be cleared by their respective clubs to play.

“We had a good conversation with Frans. He’s a player we will probably pull into the squad later this year. But we had an open conversation and said, do your rehab, make sure that you’re 100% right and in good physical condition.

“The moment he is ready to go and is medically fit and there is an opportunity to pull him in we will. Duane will be going for a procedure this week and then he will undergo rehabilitation.

“Both Duane and Cobus have received clearance from their clubs to do their rehabilitation in South Africa and once they are finished with that they have to be cleared by their clubs before we can pull them into the squad.”