‘We were never in the game,’ admits gutted Griquas coach

The Pumas put the hosts under pressure whenever they had the ball, putting in some big hits and driving them behind the gain line. 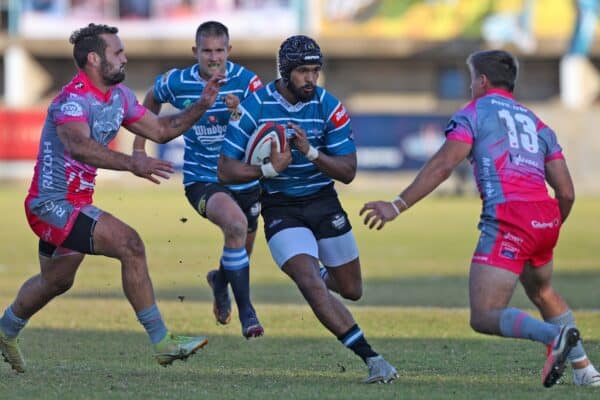 Munier Hartzenberg in action for Griquas during the Currie Cup final against the Pumas. Picture: Gallo Images

It was a brilliant Currie Cup final for the visiting Pumas and a disappointing one for hosts Griquas, as coach Pieter Bergh admitted that his side were second best throughout the finale.

The Pumas produced an impressive first half to lead 18-9 at the break and extended that lead to 26-9 early in the second half before Griquas chipped away, bringing it back to 26-19 when the full-time hooter went.

The home side had gone into the match as slight favourites in front of a raucous crowd in Kimberley, but they could not match that intensity on the field of play.

“I have to congratulate the Pumas and Jimmy (Stonehouse). We were never in the game. They dominated us from the beginning, partly because we put ourselves in that position,” said Bergh.

“To be honest I thought we got stage fright. We didn’t pitch up. There were too many mistakes and errors putting us on the back foot. We didn’t kick one contestable kick the whole game,” Bergh added.

“So we didn’t execute our plan and all we can say is we beat them twice this season because we were tactically very good, but today we were not.”

A monster defensive effort from the visitors was key in the match, as they put the hosts under pressure whenever they had the ball, putting in some big hits and driving them behind the gain line time and time again.

“They were more physical than us, their defence and set piece was better than us. In all areas in the game we were second best, and if you don’t pitch up then you will be second best in everything,” Bergh said.

“But all credit must go to Jimmy, he deserves it. He has done a brilliant job all year. The way they have come back, beating the Cheetahs in the last minute and then come here for the final and won was fantastic.”