OPINION: Junior Boks prove that youth rugby in South Africa is as strong as ever

The SA U-20 side went unbeaten through the Six Nations Summer Series, and registered wins against England, Ireland, France and Wales. 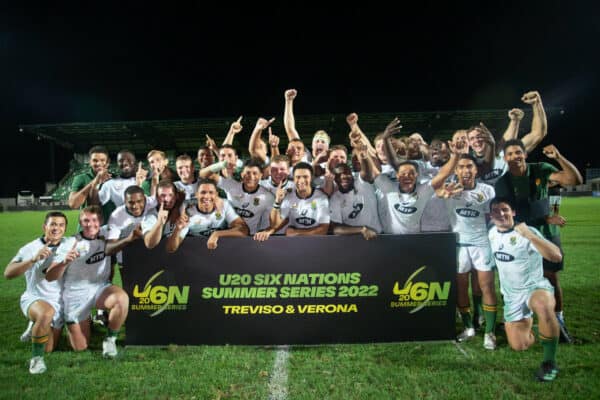 The victorious Baby Boks celebrate beating Wales in the final of the U20 Six Nations Summer Series at the Stadio di Monigo, in Treviso, Italy on Tuesday. Picture: INPHO/Tom Maher

South Africa has always had an incredibly strong junior rugby structured which has churned out international quality youngsters over many years.

Despite a barren few years of junior rugby due to Covid, with barely any international action, the Junior Boks proved that the SA junior structures remain as strong as ever, as they picked up where they left off with a massive showing at the U20 Six Nations Summer Series in Italy.

After being invited to the tournament featuring seven Northern Hemisphere sides, the Junior Boks then proceeded to blitz the competition, flexing their muscle from the South with an imperious showing.

The U20 Six Nations sides of Ireland, France, Wales, England, Italy and Scotland were joined by Georgia and the Junior Boks for the Summer Series, with them being split into two pools of four teams.

The Junior Boks were drawn in the pool of death with 2022 U20 Six Nations champions Ireland, runners-up France and third placed England.

The bottom three sides in the U20 Six Nations, Italy, Wales and Scotland were then drawn together along with Georgia.

Despite being in the far tougher pool the Junior Boks were brilliant in cruising through the pool stage unbeaten, winning every game by more than a converted try.

England proved to be their biggest challenge in the opening match, as they beat them 30-22, before they brushed aside Ireland 33-24 and ended the pool stage in style by thumping France 42-27.

This set up a final against Wales, who also went through their group unbeaten with wins of 45-15 over Scotland, 30-24 over Georgia and 23-20 over Italy.

The Junior Boks however had way too much firepower for Wales and in a relatively one sided final powered to a 47-27 win to clinch the Summer Series crown.

It should have been a bigger margin of victory for the Junior Boks, who led 47-8 after 61 minutes, however they then went into cruise control over the final 15 minutes to allow Wales to run in three late tries to add respectability to the total.

The performances of the Junior Boks at the Summer Series once again proves that South African youth rugby is still the juggernaut that it has been, and they will be keen to prove it again at next year’s U20 World Rugby Championships.