Star back Cheslin Kolbe is preparing for another big aerial battle with the Welsh wingers. 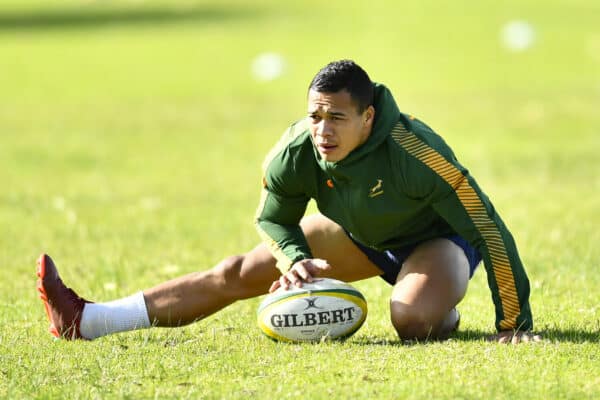 Bok wing Cheslin Kolbe is preparing for an aerial battle in the third Test against Wales in Cape Town on Saturday. Picture: Ashley Vlotman/Gallo Images

The Springbok forwards are expected to put in the hard yards and give the backline front foot ball to play off during the final Test against Wales at the Cape Town Stadium on Saturday, according to wing Cheslin Kolbe.

Kolbe believes that the backline will be able to have their moment to shine if the grunt work can get done up front, which will then give them a chance to shine.

ALSO READ: Boks, Wales to have full go at each other in scrums

“We have an amazing backline and forwards but there is definitely a plan in place of what the coaches expect from us and I think as a team we just need to deliver that on the field as best we can,” explained Kolbe.

“Obviously we would all love to run with the ball and have some one on one opportunities, but those moments in the game will definitely come as long as the forwards first put in all the hard work which will make us as backline players look better.

“I think mainly all the hard work is done up front and we must now execute the plan that we have worked on throughout the week on Saturday.”

Kolbe is however preparing for another big aerial battle with the Welsh wingers, as Jaden Hendrikse’s selection at scrumhalf ahead of Faf de Klerk is partly down to his greater accuracy with the boot.

“I am excited for Jaden (Hendrikse) and it is a big responsibility for him to give direction to the team and make sure his responsibility in the system is taken care of,” said Kolbe.

“I don’t want to give away too much about what’s going to happen on Saturday, but whenever there are kicks we as wings have to chase hard and get into that aerial battle as hard as we can. Wales and the Springboks do play a similar brand of rugby.

“I have played against (Welsh wings) Josh Adams and Louis (Rees-Zammit) quite a few times at club level and they are amazing players with a lot of experience. So it is a good challenge to come up against them again and I am looking forward to that.”