'You’re not a national coach to learn lessons. You learn that at age-grade or club level – I mean that sincerely.' 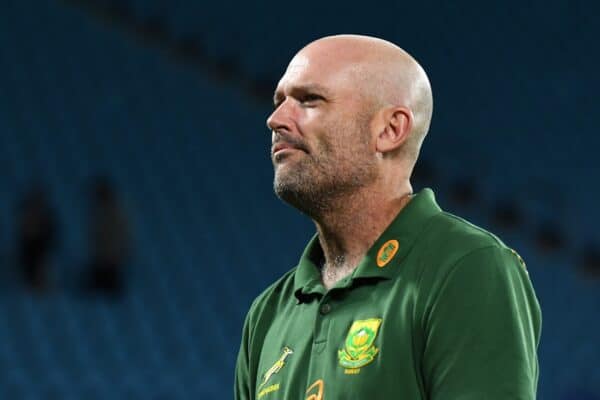 Jacques Nienaber, one of the heroes who helped turn a Springbok side at its lowest ebb into world champions, is now trending towards zero in some critics’ eyes, with fellow World Cup winning coach Jake White the latest to take a potshot.

White, now spearheading the Bulls’ renaissance as director of rugby at Loftus Versfeld, took a thinly veiled swipe at Nienaber’s lack of coaching experience in a column he wrote for the Rugby Pass website on Thursday.

Criticising the decision to make 14 changes to the Springbok starting XV and suffering an historic first defeat to Wales on home turf last weekend in Bloemfontein, White said Nienaber should have learnt not to experiment at Test level in that fashion but at junior or club level.

“Making 14 changes obviously didn’t work for the Springboks and personally, I think Jacques Nienaber missed a trick,” White wrote. “There’s an expectation that you win every time you play in South African colours and the margins in Test rugby are incredibly small.

“I’m told his rationale for picking that second Test team was because he … didn’t want them to just be playing a dead rubber in the third Test. I’d say I don’t think there should ever be a dead rubber Test when you’re playing at home.

“The job of a national coach is to win Test matches. National coaches shouldn’t use Tests to see if players are good enough, thats what A sides or training is for.

“You’re not a national coach to learn lessons. You learn that at age-grade or club level – I mean that sincerely – there’s a reason people go through a system to become national coach,” White said.

The often-outspoken coach added that Wales will love the prospect of a winner-takes-all contest in Cape Town and the situation the Springboks have put themselves in.

“What I’m expecting on Saturday is massive amounts of pressure that he [Nienaber] didn’t need. Nienaber could have won the Series and now he’s created a real cauldron in Cape Town.

“It’s at sea level, and the Welsh will be boosted by the fact they’ve contested Tests on the highveld. Wales will come brimming with confidence. I’ve coached against them, and the one thing they don’t do is go away.

“Going back to selection, when Sir Gareth Edwards, one of the greatest players of all time, said it was a slap in the face, I can’t believe it wasn’t a real motivation for the Welsh team.

“Wales won’t make changes to a winning team. With consistency comes confidence. It’s backs to the wall for the Boks and if they don’t get the proper game going, they could lose the series,” White said.