The race is still open in Championship, says Kings coach

A 3-0 beating of Free State Stars last Saturday moved them to fifth in the standings with 13 points – six behind leaders Uthongathi – after nine matches. 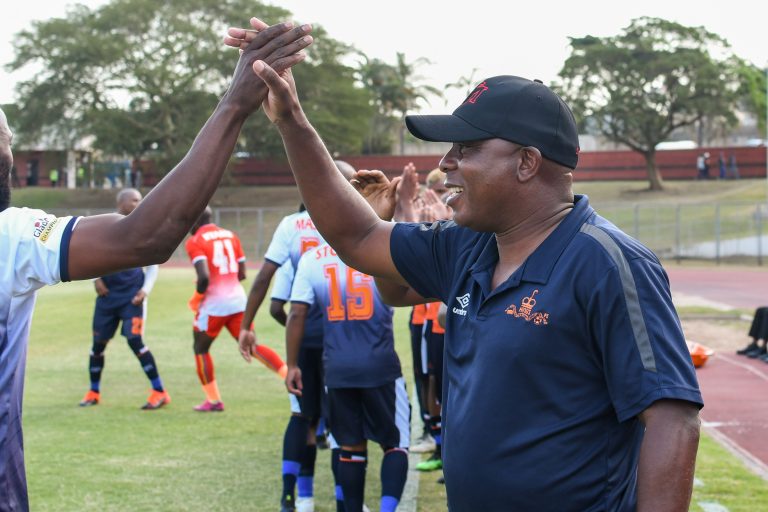 Real Kings coach, Joel Masutha is not worried that his team a whole six points behind current GladAfrica Championship leaders, Uthongathi FC as he says he wants them to wait for the right time to pounce.

A 3-0 beating of Free State Stars last Saturday moved them to fifth in the standings with 13 points – six behind leaders Uthongathi – after nine matches. Sfundo Sibiya, Mbulelo Wambi and Edward Manqele scored for the home side.

“It was a good win,” conceded Masutha speaking to Phakaaathi yesterday. “It was the first time we scored three goals this season. It is a confidence booster especially ahead of our game against Steenberg United who are aggressive at home. We needed this win and goals for our confidence,” he added.

As things stand, Masutha says anything may still happened as mathematically even Jomo Cosmos who are bottom of the standings can still make a dash for the GladAfrica Championship title.

“The team who are at the bottom of the log can still win this league, realistically speaking. But I’m just saying it is still too early to tell or talk about promotion. For now we want to keep the gap between us and the guys on top very small so that whenever something happens we can just pounce. The goal has not changed but all of us are still relegation and promotion candidates,” he said.

Abantu Bemthetho squandered a comfortable 2-0 lead to suffer yet another defeat that keeps them on the wrong end of the table early on. Decide Chauke’s spot-kick and Katlego Mojela’s goal gave the home side a clean lead going into the half time break. It must have been a nightmare for the urban Warriors coach to watch his team trail again as they were fresh from a similar situation at Swallows the week before. But this time around he managed to reel them back in and a hattrick by Abednego Mosiathlaga sealed a good win away from home.

Tingwenyama’s bad start to their campaign continued as they could not find a way through the division’s new boys. Steenberg are meanwhile slowly becoming a menacing side and the win away will serve as a confidence booster. Ruzaigh Gamaldien was the man for the Cape side as he scored in the second half to lift them to sixth place.

With their good start, the Cane Cutters can afford to drop a point here and there but that might come back to haunt them later in the season. The provincial derby against the Rich Boys was another spectacle but there were no goals to show for all the chances created. Uthongathi remain top with a three points cushion and a game in hand.

A first half goal by Thembisani Nevhulamba gave the home side the lead going into half time and it was a start of what would be the Hammer Boys’ first defeat since their promotion. Phumelele Bhengu scored from the spot in the second half to double the lead. Nhlanhla Mnganga  made it 3-0 before their visitors found one back in the dying minutes. We could not establish who scored for JDR.

It was not a bad result for Ezenkosi considering their struggles so far this season. The draw gives them a valuable point as they had to endure some incessant attacks from the Dube Bird in a humid Giyani Stadium. Ezenkosi remain rooted at the bottom.