Going into the Absa Premiership game against Kaizer Chiefs at FNB Stadium, AmaZulu were like the Biblical sacrificial lamb, but the relegation threatened side flipped the script upsetting the league leaders 1-0 on Saturday night. 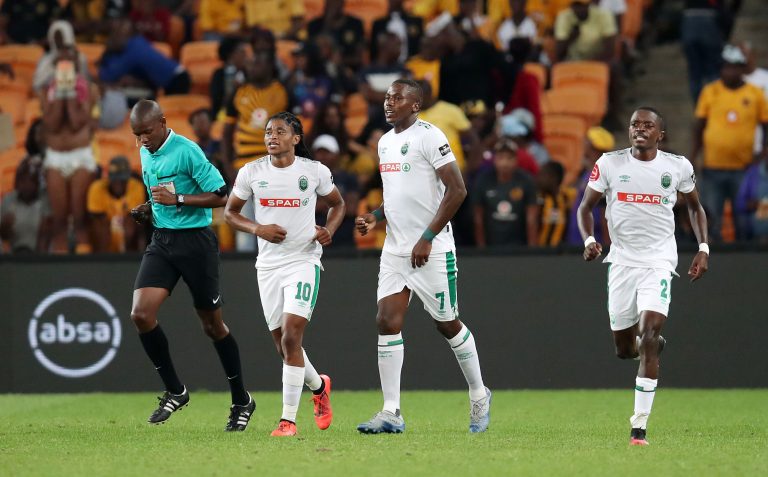 Bonginkosi Ntuli of AmaZulu (7) celebrates goal with teammates during the Absa Premiership 2019/20 match between Kaizer Chiefs and AmaZulu at the FNB Stadium. (Muzi Ntombela/BackpagePix)

With a win, Amakhosi would have stretched their lead to 10 points but AmaZulu, who were under rookie coach Ayanda Dlamini’s guidance rebelled against the script and put the Naturena side to the sword instead.

Usuthu showed early that they were not going to easy prey and gave a fight in the early exchanges and came close to getting a goal as they unexpectedly pushed their hosts back. Amakhosi also played better trying to build up their attacks than going route one like they have in the past few games.

The first real chance of the game however fell for Leonardo Castro who found himself at the end of a brilliant Lebogang Manyama through pass but the striker sliced his first touch shot wide in the 28th minute.

Amakhosi eventually built some momentum and pinned Usuthu back but as they went looking for a goal before half time, it was their visitors who drew first blood in the 44th minute with Bongi Ntuli finishing off Talent Chawapiwa’s brilliant counter run.

And five minutes after coming on Billiat was in the thick of things finding Manyama with a brilliant cross but the latter couldn’t control his header and the effort flew harmlessly wide.

Usuthu then came close to extending their lead with two counter attacks, finding a hole in Amakhosi’s left side of defence but they couldn’t make it count.

Billiat tried a header in the 1st minute as Amakhosi went looking for an equaliser but his effort was easily dealt with by Siyabonga Mbatha. Seven minutes to the end, Billiat went at it again but this time couldn’t direct his header at goal as he dived for Reeve Frosler’s cross.

The win saw Usuthu move off the bottom to 15th place and it will be a huge boost for them as they look to climb away from the relegation places.