All you need to know about Mamelodi Sundowns’ new striker

The 26 year-old Slovakian had a successful spell in Scotland at Dundee United. 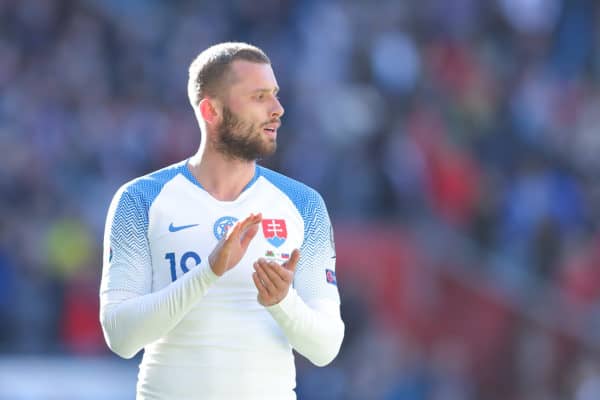 Pavol Safranko will hope to shine for Sundowns in the Caf Champions League next season. Picture: James Williamson - AMA/Getty Images.

Mamelodi Sundowns continue to lead the way when it comes to recruiting international players to the DStv Premiership, having often turned to South America, with former head coach Pitso Mosimane describing it as a “gold mine”.

ALSO READ: Pitso reveals which national team he would like to coach

Masandawana have chiseled out the likes of Gaston Sirino, Leoardo Castro, Jose Torrealba, and Ricardo Nascimento, just to mention a few. This time around, Masandawana have turned to Europe in luring striker Pavol Safranko.

Nicknamed ‘Safo’, the 26-year-old Slovakia-born striker plied his trade in Romania over the last two seasons for Sepsi Sf. Gheorghe, where he produced an identical return of goals, scoring nine goals in 34 league games in either season.

He was part of the Uefa Euro qualifiers with Slovakia but was unfortunately left out of the squad for the tournament which ended this past Sunday, with Italy claiming their second title after edging England on penalties.

His biggest return of goals was in the 2018/19 season when he turned out for Dundee United on loan from Danish team Aalborg Boldspilklub, when Dundee were playing in the Scottish second tier. ‘Safo’ scored a dozen of goals in 33 games, helping his side gain promotion to the top flight.

‘Safo’ is expected to be at Sundowns until 2026 as he signed a five-year contract with the Chloorkop-based side. Having scored 44 league goals in 183 appearances (correct from 2016) in his career where he has also represented the likes of Podbrezova, Dun. Streda (both Slovak teams), it remains to be seen if he will do enough to help Sundowns as they particularly bought him to give them a different dimension going into the new season of the Caf Champions League.

Safranko also has an older brother, Jan Safranko, who played professional football and retired in 2011.