Jonevret heading for the exit door at Pirates 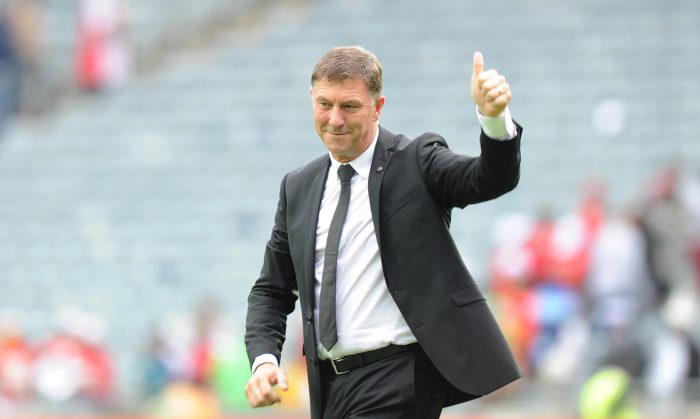 The Swedish mentor has been with the Buccaneers for 126 days, and has been in charge for 18 games, winning six, drawing seven and losing five.

Jonevret showed he was aware of the possibility of him losing his job at the end of yet another disappointing season for Irvin Khoza’s club when he said he would like to stay on as the club’s coach at a post-match presser at the Moses Mabhida Stadium.

The Buccaneers’ defence collapsed after conceding a second goal on the night from in-demand SuperSport United striker Jeremy Brockie in the second half of the game. The match saw the Pretoria outfit successfully defend their Nedbank Cup title.

Jonevret could not indicate whether he would be at the helm in the Pirates ship next season, almost suggesting a chat with the club’s management would determine his future.

In a candid manner, the Swedish mentor, who joined Pirates in February, said he would like the club to sign more players to consolidate the squad, as he felt the team still needed more quality if they were to compete for top honours next season.

The downside to acquiring players for any PSL team is the management’s involvement in the selection of players to bring into the squad, something Jonevret was quick to point out.

Pirates have had three men trading places at the coaching seat this season, with Muhsin Ertugral getting the season under way at Pirates before leaving Augusto Palacios to plug the holes in the sinking ship before Jonevret came to steer the vessel into the top eight.

The latter found Pirates in a good position to finish in the top eight, but failed to help them achieve what has become the norm for the Buccaneers since the inception of the PSL.

Many would feel both Stuart Baxter and Kjell Jonevret were under scrutiny in the one-sided match on Saturday night. The result could be his last chance to prove he is the right man to lead Pirates heading into the next season.