It was a weekend of upsets in the National First Division as new comers proved their worth against the division’s top teams. 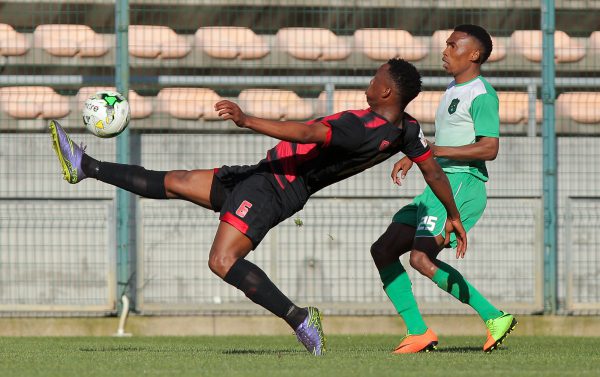 Here is a wrap of the NFD’s weekend action.

Highlands Park 1 (Mvala, 84) – University of Pretoria 2 (Shozi, 35; Hoareb, 72 og)
The Lions of the North are now seventh on the log with four points while Tuks are ninth on the same tally of points. Phelelani Shozi put Tuks ahead in the 35th minute and Larry Hoareb scored an own goal to give Shaun Bartlett’s charges some cushion in the second half. Mothobi Mvala scored for Highlands in the 84th minute but it was too little too late.

Ubuntu Cape Town 0 – Super Eagles 0
The result did very little for either team as Free State’s Super Eagles remain bottom of the standings despite securing their first point in the professional ranks. This could be a boost though for Eagles. Ubuntu now have two points as their difficult start to their first campaign continues.

Tshakhuma Tsha Madzivhandila 1 (Monde Mpambaniso, 75) – Jomo Cosmos 0
Madzuvhandila scored their first victory of the season against a Jomo Cosmos side who had been rampant in their last match as they beat Tuks 5-0. This could be the turnaround that Sello “The Gloved One” Chokoe had been looking for with his Venda, Limpopo based team.

Mbombela united 0 – Real Kings 1 (Sphamandla Majola, 71)
A game The Magic Boys coach Simo Dladla described as difficult as both teams play a similar style with youngsters and was happy to eke out a result. The result shot Kings up to fifth on the log while Mbombela remain in the bottom half.

Richards Bay 0 – Mthatha Bucks 0
Amathol’Amnyama were happy with a point away in KwaZulu-Natal and moved up to second place with five points, two behind leaders Cape Town All Stars. For Roger Sikhakhane’s team however the result was not good as it sees them remain second from bottom.

Royal Eagles 1 (David Zulu, 75) – Stellenbosch FC 1 (Tshepo Maboe, 40)
The home side had to come from behind to salvage a point as Stellenbosch threatened to put Allen Freese’ campaign into disarray early on. Freese will feel a point was enough on a hard day for his team.

Uthongathi 1 (Celimpilo Ngema, 52) – Black Leopards 0
Leopards’ stagnant start to the new campaign continued as they were frustrated by the division’s new boys. Uthongathi dominated their Limpopo rivals and their efforts were duly rewarded when Celimpilo “Zizou” Ngema scored early in the second half.

Witbank Spurs 2 (Khethukuthula Zwane, 39, Sabelo Nyembe, 54) – CT All Stars 2 (Cebo Meyiwa, 43, Ruzaigh Gamaldien, 85)
David Kannemeyer’s team had to come from behind twice to secure an important point away to Spurs in a hotly contested match. The point earned sees All Stars take top spot in the early stages of the campaign.