There was so much hype before the match and it was even picked by broadcasters as the one to be televised live but the Limpopo derby failed to deliver goals as Black Leopards were held to a goalless draw by Venda neighbours Tshakuma Tsha Madzivhandila. 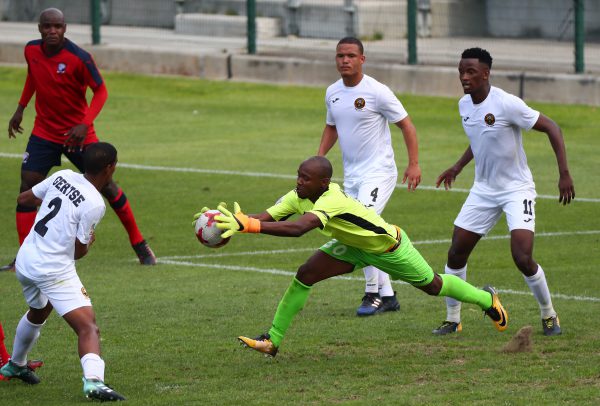 The match was however played at high temperament and both sides tried to find the back of the net but it was not to be.

Royal Eagles’ coach Zipho Dlangalala meanwhile lauded his players’ commitment as they beat Mthatha Bucks 3-1. Dlangalala said the team are just reaping the rewards of what they put in during the week at training.

Royal Eagles 3 (J. Sauls, M. Mncube, D. Brown) Mthatha Bucks 1(L. Nomandela)
Zipho Dlangalala is continuing his magic at Eagles as he guided them to a big win over a much fancied Amathol’amnyama side. Joshua Sauls opened the scoring before Mazwi Mncube proved to Mthatha that they made a serious mistake in allowing him to leave as he made it 2-0. Luyolo Nomandela proved his worth when he cut the lead in half and at some point it looked as if they might steal a point but it was not to be as Diego Brown scored the third for Eagles and ensured the points remain with the home side.

Super Eagles 1 (M. Mokoena) University of Pretoria 1 (T. Moseki)
Shaun Bartlett’s team could not keep their impressive winning streak going as Tshegofatso Mashego’s Super Eagles managed to hold them to a draw. Modibedi Mokoea scored for the home side while AmaTuks’ goal was netted by Thabo Moseki.

Black Leopards 0 Tshakuma Tsha Madzivhandila 0
The much anticipated first derby between the two Limpopo side took the infamous direction of the more famed Soweto derby as it ended goalless. It was however not for a lack of effort from either side as they game some of the best displays.

Uthongathi FC (S. Vilane) 1 Witbank Spurs 0
Siyabonga Vilane’s solitary strike was enough to hand the Cane Cutters their second win of the season and much needed three points. The win moved Uthongathi to ninth place on the log and will bring some relief to Ronnie Govender’s team.

CT All Stars 1 (L. Setelele) Jomo Cosmos 0
Igugu leKapa put on a brave to overcome Ezenkosi despite finishing the match with nine men. The hosts played most of the match with nine players as Ricardo Williams was red carded 20 minutes into the match while Lucky Masana got his marching orders eight minutes into the second half. Vladislav Heric’s team however managed to hold on to their 1-0 lead which came courtesy of Lucky Setelele in the 15th minute.

Stellenbosch 0 Richards Bay 0
The new coach effect worked well for the Rich Boys who really needed some points to start climbi away from the bottom of the log where they find themselves stuck. It was Jomo Ntyuli’s first match in charge and he will be happy with the point away to the division’s leaders.

Real Kings 1 (N. Phewa) Highlands Park 1 (M. Mvala)
The Magic Boys put on a last minute heroic display to save a point from as the Lions of the North looked to be overpowering them.
“They came with a solid game plan and they ensured that all our playmakers are tighly marked and we couldn’t do anything,” said Kings’ midfielder Lindokuhle Mtshali.
Mothobi Mvala gave the visitors the lead in the first half but Nkosingiphile Phewa wrestled a point when he equalised late in the match.