Nogwaza still loves the game but politics turned him off

Former Bush Bucks striker Mzawuthethi Nogwaza says he is enjoying spending more time with his family and friends after his retirement from football. 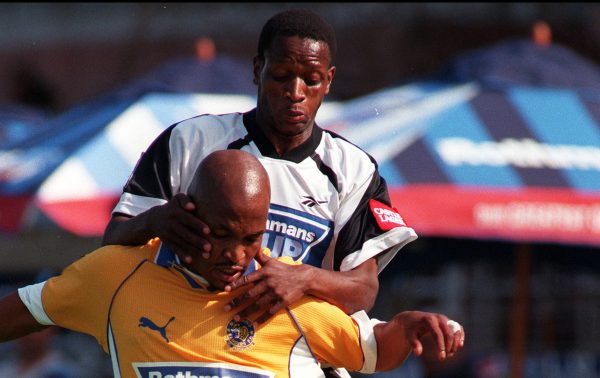 Nogwaza opened a sports shop and warehouse that sells sports equipment in Libode in the Eastern Cape. The former striker still loves playing the game and staying in shape by playing football and going to the gym. He says playing football professionally kept him away from his family and now he has a chance to make up for lost time.

“I am at home, I am not coaching or doing anything that former footballers do, I have decided to be a businessman, I still love the game but the politics within our football made me decide against coaching or be involved heavily with anything that has to do with the sport.”

Nongwaza’s business has allowed him to maintain the life he had as a footballer, buying three houses across the country, in the Eastern Cape, Cape Town and Johannesburg. He also owns five cars.

The former Bloemfontein Celtic man is part of the Master and Legends League and visits former footballers whenever he is in the different provinces to catch up and play against them.

Nongwaza detailed the impact Bush Bucks had on his career and on that of many players that became household names in South African football in the 1990s. Nongwaza still helps young people that would like to be sports stars by giving them advice on how to train and on what is required to become a professional athlete.

“Whenever I drive around, even if it’s not here in the Eastern Cape, I stop the car, I get out and talk to them about sport and what they are trying to achieve. I will play with them sometimes. I love football with all my heart, I am not just interested in being involved in the politics that come with being involved at management level. I opened my business and it is the only one that supplies the equipment in the villages around here.”

The former Phunya Sele Sele forward knew a career in football is short- lived and so decided to study towards a teaching diploma, which he had initially planned to complete after retiring from football. Nongwaza has encouraged his sons to focus on going to school so they won’t have to rely only on their football skills to earn an income.

“I was not prepared for retirement, I stopped at 31, but I knew football was not forever, I wanted to get out before it could throw me out. I still had offers and people telling me to come back but I knew I had to get out.

“I was studying towards a teaching diploma, but in my final year I learned that corporal punishment was no longer allowed in schools. That ended the plan I had of becoming a teacher after retiring, so I never completed my diploma because of that,” Nongwaza laughed.

“I believe in discipline and that wouldn’t work for me. Not being able to discipline the kids turned me away.”