Mamelodi Sundowns coach Pitso Mosimane is convinced that Golden Arrows will adopt a defensive approach when the sides meet in the MTN8 quarterfinals at the Lucas Moripe Stadium on Saturday afternoon. 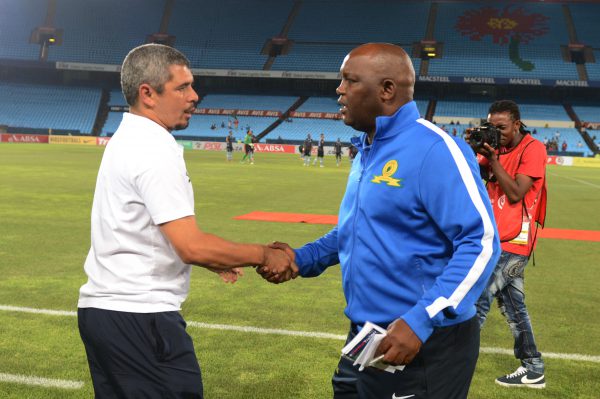 “The tactics always changes when Arrows play us here and it is totally different when they play us in KwaZulu-Natal. When they play us there they are more cocky, giving us trouble and attacking us but they have a different approach when they come here,” said Mosimane.

“We know about it, we dealt with it in the league last season. I think I should just look at that match and work on that match to see what’s coming,” he added.

Mosimane, who has not won the MTN8 with Sundowns, has highlighted Lerato Lamola and Knox Mutizwa, among others, as the danger players in coach Clinton Larsen’s arsenal.

“They have very experienced players, those players have been playing together for the past four years. Musa Bilankulu, Limbikani Mzava, Lamola, Mutizwa.

“Mutizwa and Lamola are terrific in attack, they have speed and they are goal scorers. They strive on the space behind the defence and we need to manage that… it is not an easy thing to manage,” said the former Bafana Bafana coach.