Chiefs boss not worried about Solinas’ bad start yet

Motaung said it would be unfair to give the Italian mentor timeframes as he has just started his job. 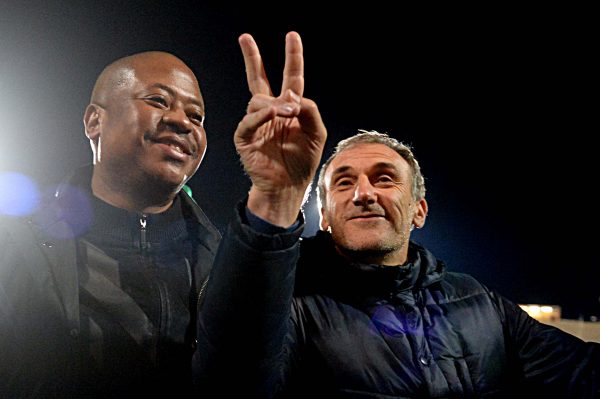 Kaizer Chiefs chairman Kaizer Motaung senior wants to give new coach Giovanni Solinas all the support he needs as he tries to return Amakhosi back to their former glorious days.

Motaung said it would be unfair to give the Italian mentor timeframes as he has just started his job.

Solinas has been under some pressure lately especially after his tactics were heavily criticised by even his own players who felt they lost matches they could have easily won had the coach used a different approach to games. Solinas remains winless in five Absa Premiership matches and was knocked out of the MTN8 recently.

“You have to bear in mind that the coach didn’t have a preseason with the team. And unfortunately we had a tight programme in August. But I am not very concerned at the moment. The coach needs to be given a chance. He didn’t have a start like other coaches where they had preseason training where he would have been able to put his systems in place. So far I am happy with what has been happened but obviously there were some glitches in our defensive area,” said Motaung on Thursday.

Motaung said the team are rebuilding after acquiring a few new players who will have to be integrated into the side.

“We have new players coming into the team which for me augers well for the team going forward. It is better to experience these hiccups at the beginning of the season then to have them later on in the season or towards the end.” Amakhosi have meanwhile launched a protest with Fifa regarding their new Madagascan player Andriamirado Andrianarimanana because his home side Fosa Juniors have refused to release him claiming to have a contract with him.

“We are happy with what we have now. The only player that we are still waiting to get a final decision from Fifa on is Adriano from Madagascar. But otherwise the acquisitions we have so far speak for themselves. We have filed everything and we are hoping for a response anytime now.

“He has no contract (with Fosa Juniors) and he is an amateur so to speak. We made an offer to his team because they are entitled to some compensation but somebody saw an opportunity for a lotto windfall and we could not reach an agreement and hence we had to go to Fifa for intervention.

“He is confident that he doesn’t have a contract. The amateur contract he had also expired five or eight months ago. That contract means they cannot withhold his move anywhere else.
“He is training with us, he is fit and ready and the only thing we are waiting on is a decision from Fifa.”