Arsenal ride their luck to make it seven in a row 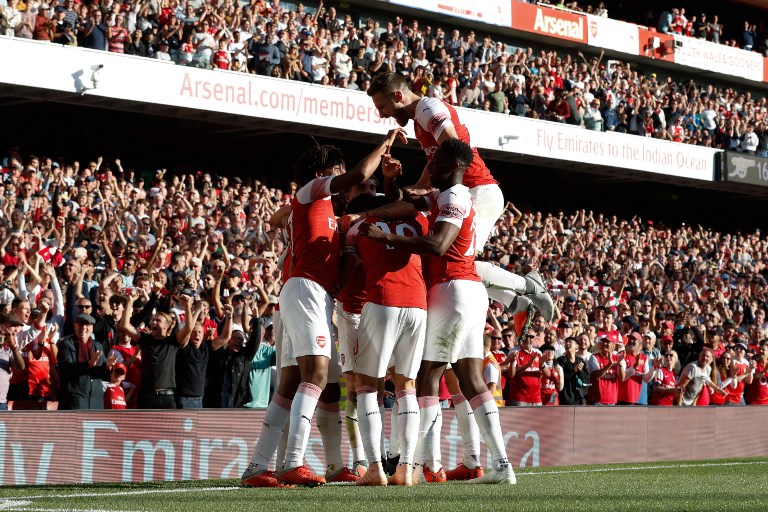 Unai Emery’s side were under the cosh in the second half at the Emirates Stadium, but they kept Watford at bay and broke out to steal the points.

Cathcart put through his own net with just nine minutes left and Ozil wrapped up the points two minutes later.

Arsenal have now won five successive league games for the first time in over a year, with additional victories in the Europa League and League Cup making it a purple patch for new boss Emery.

Not for the first time this season, Arsenal, who climb to fifth, could be considered slightly lucky after delivering another inconsistent display.

ut results while he continues to rebuild the damage from the final days of the Arsene Wenger era.

The only problem for Emery was an injury that forced off goalkeeper Petr Cech in the first half.

Watford went into a match against Arsenal higher in the table than their opponents for the first time since 1984.

But Javi Gracia’s side wasted an early chance to show that position was no fluke when Will Hughes volleyed wide from the edge of the area.

Emery was up against a former team-mate in Gracia, the pair played together at Real Sociedad, and it was the Arsenal boss who would have the upper hand eventually.

Lacazette should have opened the scoring when he seized on Cathcart’s cumbersome attempt to turn and raced clear on goal.

Cech bravely took a battering from Abdoulaye Doucoure, throwing himself into a crowd to catch Jose Holebas’s cross.

Granit Xhaka tested Watford’s Foster with a stinging long-range drive that the keeper parried to safety.

But, after grabbing his hamstring following a goal-kick, Arsenal captain Cech was forced to limp off in first half stoppage-time.

Bernd Leno, a pre-season signing from Bayer Leverkusen, came on to replace Cech for his first appearance in the Premier League.

The German did not take long to distinguish himself as he dived to keep out Troy Deeney’s flick with a superb finger-tip save.

Emery insisted this week that Aaron Ramsey wouldn’t be distracted by reports that his negotiations with Arsenal have broken down.

The 27-year-old is out of contract at the end of the season and is believed to be resigned to leaving Arsenal, with Manchester United and Chelsea interested in signing him.

Emery’s prediction appeared wide of the mark as Ramsey was anonymous before being substituted in the second half, a departure marked by a frustrated shake of the head from the Wales midfielder.

With Arsenal struggling to build a head of steam, Watford began to take control.

Leno had to race off his line to deny Andre Gray, while Roberto Pereyra was narrowly off-target after dribbling through the Arsenal defence.

Emery’s creaky rearguard was exposed again when Isaac Success sprinted clear and clipped his shot past Leno, only to see it hit the far post.

But Arsenal survived the onslaught to snatch the lead in the 81st minute.

Alex Iwobi’s cross to the near post was contested by Lacazette and Cathcart, and it was the Watford defender who got the last touch to divert the ball into his own net.

Watford had to throw men forward and Arsenal picked them off again in the 83rd minute, with Ozil applying the finishing touch to Lacazette’s cross.