Middendorp has plenty to work with at Chiefs

Chiefs gave a solid performance against Sundowns and could have easily won as they dominated play, created some good chances but squandering them all. 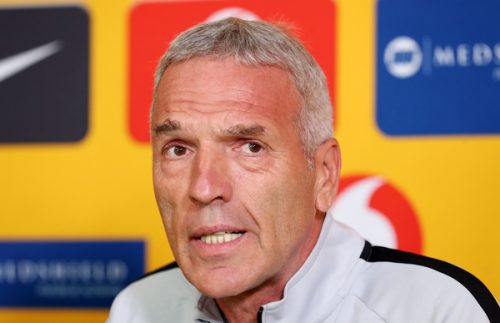 If the game against Mamelodi Sundowns was new Kaizer Chiefs coach Ernst Middendorp’s first real test since his return, he failed because he lost 2-1 at the FNB Stadium on Saturday, but he should not be discouraged.

Chiefs gave a solid performance and could have easily won as they dominated play, created some good chances but squandering them all.

They had to come from behind to equalise after Downs took an early lead through Anthony Laffor. Willard Katsande headed home to level matters before the half-time break, but Lebogang Maboe gave Sundowns the win thanks to goalkeeper Virgil Vries’ horrendous mistake.

And it was after all only his fourth match since taking over from Giovanni Solinas at the beginning of December. There were some noticeable changes to the way Amakhosi played and even Pitso Mosimane admitted they had given them a hard time.

“I was not an easy game especially after the holidays. To play this big game without momentum is never good. Chiefs are stronger and more structured and made it difficult for us. It took us some time to figure them out. They played in a manner I didn’t expect,” said Mosimane.

For Middendorp it was about continuing from the last three games where he changed things around with three straight wins to finally give the fans something to cheer about.

“We continued from where we left off regarding the other three games we played in December. I think a lot of stuff looks good. In a game of this nature it all comes down to results. We made little mistakes and in the end we lost,” he said.

“Our performance was definitely something I would say was good behaviour from the team. Everyone had a good attitude but in the end it didn’t work out for us. There are things we did right and those we got wrong. Individually and as a team it was okay,” said the 60-year-old German.

Middendorp said there should not be any finger-pointing but he will be worried about the goalkeeping with Itumeleng Khune out with a shoulder injury for the remainder of the season. Coming off his line, Vries misread a long ball from Lyle Lakay and it went over him for Maboe to blast it into the vacant net.

Chiefs’ next match is a league game against Bidvest Wits at the Bidvest Stadium before they travel to Zambia to meet Zesco United in a Caf Confederation Cup on Sunday.