Championship wrap: Uthongathi off to perfect start with big win at Ajax

The Cane Cutters ran riot on the Urban Warriors with Pule Mmodi the main instigator with two goals on Sunday afternoon. 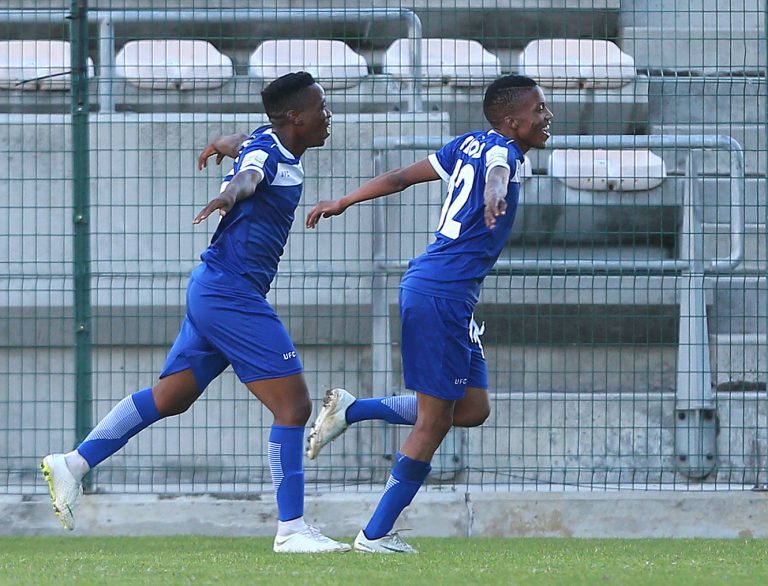 Uthongathi coach, Johnny Ferreira takes his team’s 3-0 win over Ajax Cape Town in their first GladAfrica Championship match at Athlone Stadium on Sunday afternoon as a positive signal that indicated that his players are ready for the step up.

The Cane Cutters ran riot on the Urban Warriors with Pule Mmodi the main instigator with two goals on the afternoon. Tshepo Liphoko also scored.

“If we beat – but we mustn’t get ahead of ourselves – an Ajax team who finished one place ahead of us last season and are such a big and well-resourced team, that’s a very positive signal. If we use those signals as the yardstick or barometer than I am almost certain that we will be around the play-offs places by the end of the season,” said Ferreira.

Ferreira was also happy with his players’ mentality which saw them forget the management challenges and focus on the job at hand.

“We were getting ready to play our first game against Real Kings and just a day to it, it was cancelled. This disturbed a lot of the players emotionally because we had prepared for two months for the game and then suddenly it was cancelled and we didn’t know the reasons for that cancelation.

“We have an idea now but it is too late. But we had to sit still until the issues which we didn’t understand at the time were resolved,” Ferreira told Phakaathi on Monday morning.

Tshakhuma Tsha Madzivhandila have thrown down the gauntlet and said they are the team to watch this season as they are serious about promotion to the top flight this time around. The Venda based side jumped to the top os the standings after a 3-0 drubbing of a hapless Swallows side on Saturday afternoon. Thembisani Nevhulamba, Jean Munganga and Naeem Amooje were the scorers in the day. The team seem to have found a gem in Amooje who is said the be a special talent.

Abantu Bemthethi stuttered again and suffered the consequences with Steenberg taking the opportunity to register their first win in the paid ranks. It was the visitors however who opened the scoring with Decide Chauke netting his first for the campaign. But it was not long before Damien Basadien equalised and Siyambonga madikane and Ruzaigh Gamaldiean also score to ensure the home side keep the three points for themselves.

Having come from a gruelling travelling experience in the Caf Confederations Cup, the Rockets got back to it and had to come from behind to save a point at Real Kings. Bongumusa Nkosi put the Magic Boys in the lead before Siphesihle Shangase gifted his team a point with an equaliser towards the end of the game.

It took a moment of brilliance from striker Lucky Nguzana who took a shot with his left foot from outside the box to score the winner and ensure the home side keep the full points. It was Tingwenyama’s first win of the season under new mentor Bongani Bhembe.

The spoils were shared after a ding-dong battle at Tuks Stadium on Sunday afternoon with Ezenkosi yet to register a win this season. AmaTuks took the lead through Nqobeko Dlamini but their lead was cancelled by Tumelo Matona. Ezenkosi also went in front through S’celo Mkhize but Athenkosi Dlala was on hand to save at least a point for Ziphozakhe Dlangalala’s side.

The Rich Boys poor home record continued with the team being held to yet another draw in front of their fans by Dominic Isaacs’ hard working team. Ndiviwe Mdabuka opened the scoring for the visitors but Devon Saal continued his scoring run and saved a point for the Rich Boys.

The Hammer Boys completed their successful KZN invasion with a draw, adding another point to their tally and continuing their impressive start to their first campaign in the paid ranks. And like they did at Riachards Bay two weeks ago, they had to come back from 2-0 down to earn the draw.

Eagles, who also had to wait for two more weeks to get their campaign on the road following ownership issues, looked good for their first win after Nkanyiso Madonsela had given them the lead and Somila Nsundwana increased it to 2-0.

But Thabani Sibanyoni was not to be outdone as he completed a brace that made sure the Pretoria side go back home with five out of a possible nine points from their trip to KwaZulu-Natal. They drew with Richards Bay and beat Real Kings in their first two matches.