Orlando Pirates and Cape Town City battled to an entertaining 3-3 draw at the Orlando Stadium on Saturday. 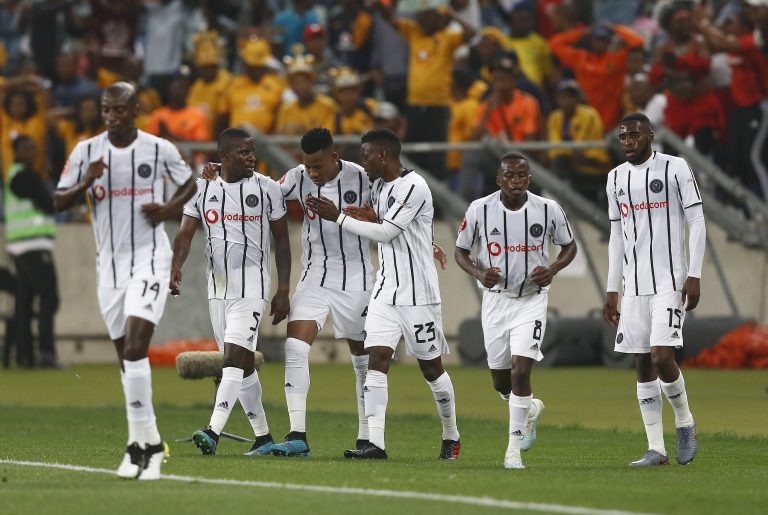 Orlando Pirates celebrate the equaliser during the Absa Premiership match between Bidvest Wits and Orlando Pirates at Moses Mabhida Stadium. (Photo by Anesh Debiky/Gallo Images)
While Pirates were looking to get a win after a 4-3 loss to Bidvest Wits in the previous game, Cape City were looking to get a win after a 1-1 draw with Golden Arrows.
The Mother City outfit couldn’t have asked for a better start in the game,  scoring two goals as early as the sixth minute. But Pirates fought hard to make it 2-1 just before going into the break.
It all started with Thabo Nodada finding the back of the net with a powerful shot, before Kermit Erasmus made it 2-0.
In the 22nd minute, Pirates managed to get a goal back through skipper Happy Jele’s shot.
The Buccaneers weren’t done yet as they finally leveled the scores just before the teams went into the breakthrough a well-struck shot by Tshegofatso Mabasa to make it 2-2.
In the second half, Cape City had to make tactical changes with Erasmus and Fagrie Lakay going out due to injury.
With Cape City having started the game stronger, it was Pirates who came back with more firepower as they got into the lead for the first time in the game courtesy of an Alfred Ndengane header in the 57th minute.
As the game progressed, both teams seemed likely to score, but goal scoring chances weren’t put into good use while at both ends goalkeepers Joris Delle and Peter Leewenhurgh managed to pull some great saves.
It was up until the 84th minute when Shane Roberts scored from close range to make it 3-3 as both sides shared the spoils on the day.