At the end of their games, both Sekhukhune United and Royal AM took out T-shirts emblazoned with the “2020/21 Champions” as wild celebrations ensued. 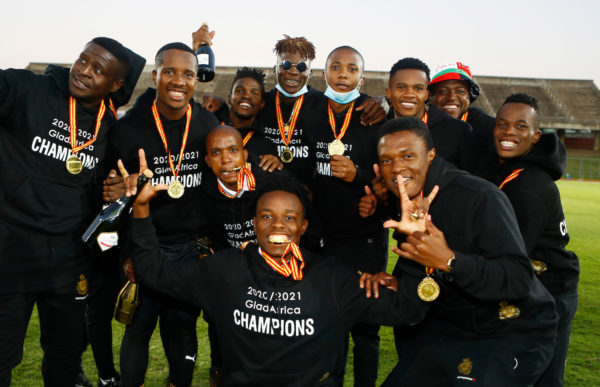 The Premier Soccer League was left with egg on its face and its name brought into disrepute on Sunday after two teams celebrated winning the GladAfrica Championship.

At the end of their games, both Sekhukhune United and Royal AM took out T-shirts emblazoned with the “2020/21 Champions” as wild celebrations ensued.

Sekhukhune had beaten JDR Stars 3-1 at Makhulong Stadium, and Royal AM had drawn 1-1 with Cape Town All Stars at Chatsworth Stadium.

Royal AM even handed their players ‘winners’ medals’. They later took the party to a popular Umlazi eatery, KwaMax’s Lifestyle where more guests including journalists joined in the celebrations.

But none of the teams have been officially anointed by the PSL as winners as there is still a pending matter that needs to be dealt with. The PSL sent out a vague statement explaining why none of the teams would be crowned after the games.

“The Premier Soccer League has been threatened and served with Court papers in relation to an arbitration award handed down impacting the GladAfrica Championship table. The matter must clearly be ventilated one way or the other and resolved.

“The League’s responsibility is to properly consider the matter and take advice so as to ensure that all disputes and differences are finalized urgently and without delay. While the matter remains in dispute, it is advisable to delay the GladAfrica Championship trophy handover for a short period to permit the League to consider the matter. The matches will continue and the results will be arrived at, and the issues resolved,” read the statement which was sent out after the games.

Sekhukhune appealed a ruling by the PSL’s Disciplinary Committee which deducted three points from Polokwane City who they had found guilty of not following the rules. City had failed to have five Under-23 players on their team list in a game against Sekhukhune in January.

The DC however didn’t award the deducted points to Sekhukhune who then took the matter for arbitration. The arbitrator ruled in their favour and awarded them the points, setting the cat amongst pigeons.

This resulted in Sekhukhune overtaking Royal AM at the top. But the PSL sent out a statement to say they are looking into the matter as Royal AM also threatened to take the matter further.

It will be interesting to see how this plays out as both teams are adamant they are the legitimate winners of the division and want automatic promotion.