Gumede strikes twice for Arrows to send SuperSport out on penalties

Arrows are through to the MTN8 semifinals. 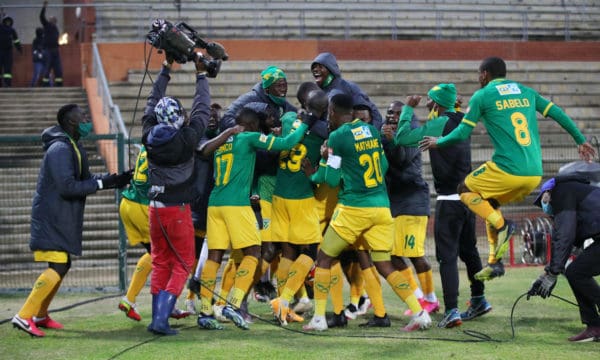 Iqraam Rayners thought he was the hero for SuperSport United when he scored Matsatsantsa A Pitori’s second goal in the quarterfinal of the MTN8 against Golden Arrows on Saturday afternoon. But in the end, the real hero was Arrows’ Michael Gumede who came off the bench to score the equaliser deep into extra time and netted the final spot kick.

Rayners’s evening, indeed, in the end took a turn for the worse as he put his penalty over the bar in the shoot out.

The sides were tied at 1-1 at the end of normal time, and in the 99th minute, Rayners scored a beauty but it was cancelled out by Gumede at the death. The Wafa Wafa tie was then decided on penalties after a 2-2 stalemate and Abafana Bes’thende advanced to the semifinals when they won the shootout by 4-3.

Teboho Mokoena was the first one to step up for United in the shootout and his attempt was met by the gloves of Sifiso Mulungwana, who denied SuperSport the lead. United’s captain and goalkeeper Ronwen Williams made sure that his side stayed in the contest as he also sprung to make a save, denying Siboniso Conco’s shot. After scoring a Rayners, however, seemingly could not calm his nerves as he ballooned his spot-kick over the bar, allowing Gumede to grab the spotlight as he scored the winner.

In regulation time, veteran striker Knox Mutizwa opened the scoring for the hosts in the 50th minute from the penalty spot but it did not take Matsatsantsa A Pitori long to find the equalizer as they drew level some 18 minutes later.

United assistant coach Andre Arendse – who was in the hot seat for Kaitao Tembo as he is suspended – must have felt like a genius as it was his substitute, Gamphani Lungu, who found the back of the net eight minutes after coming on for Bradley Grobler.

The goal was crafted by Thamsanqa Gabuza, who used his quick movement to beat his markers before laying the ball off to Mokoena. The Bafana international found Lungu on his bike and he made sure to fire past Mulungwana from an acute angle.