City and Swallows both spurn opportunities in a goalless draw. 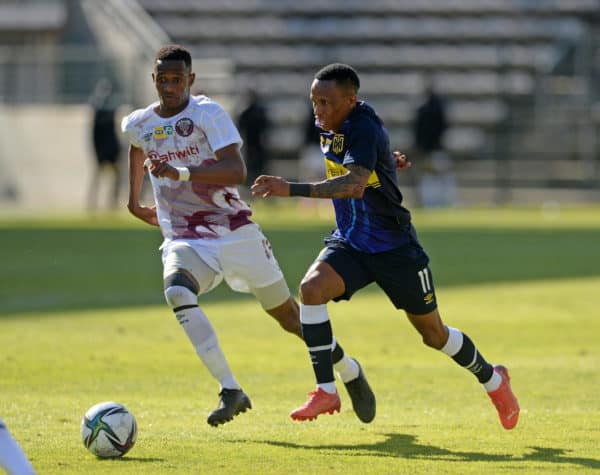 It certainly wasn’t for a lack of effort, but Cape Town City and Swallows FC remain goalless heading into next month’s second leg of their MTN8 semifinal.

ALSO READ: Kutumela poised to give more and more to Mamelodi Sundowns

It is the Birds who will be the happier team from the first leg draw at Athlone Stadium on Sunday, with home advantage in Dobsonville to come for Brandon Truter’s men.

City had the better chances in the Cape, hitting the woodwork in the first half, but Swallows also had their opportunities. Both goalkeepers, indeed, Virgil Vries of Swallows and Hugo Marques of City, emerged from the game with plenty of credit.

Cape Town City started the game very much on the front foot, and Khanyiso Mayo put an early header wide before Terrence Mashego fired in a low rocket that slipped just the wrong side of Virgil Vries’ left hand post.

Mdu Mdantsane then shot over, but Swallows grew into the game themselves, looking particularly dangerous on transition through the pace of Thabo Matlaba and Khetukuthula Ndlovu, with striker Ruzaigh Gamildien also prominent.

Mashego’s surges forward for City on the left meant there was plenty of space behind him and Ndlovu went breezing into that area, but couldn’t beat the first defender with his cross.

Defender Junaid Sait then got forward and had a good opportunity with a header, but he couldn’t get sufficient power on it and Hugo Marques gathered easily.

Dillon Solomons was next to threaten for the Birds, swinging in a dangerous cross that Tauriq Fielies did well to scramble away.

Matlaba burst forward and set up Gamildien, but he shot wide, and the veteran former Orlando Pirates defender then found Mbulelo Wambi, who cut inside well, but whose shot was also too weak.

The closest either side came to scoring in the first half was in the 26th minute, as a terrific free kick from Khanyiso Mayo was slammed against the post from point blank range by Abbubaker Mobara.

Mayo then drew a wonderful save from Virgil Vries on the stroke of half time, his long-range effort tipped over by the Namibian shot-stopper. From the resultant corner, Fielies was completely unmarked, but headed wide.

Ndlovu went on another rub behind the City defence just after the break, and his cross fell to Solomons, but his effort was deflected for a corner. At the other end, Mdantsane’s shot was heading goalwards but well-blocked by a combination if Sait and Sipho Sibiya.

Just after the hour mark, a wonderful move from City saw Mashego cross for Mayo, but his effort was again superbly stopped by Vries.

Vries was called into action again eight minutes from time, pushing away an effort from Abdul Ajagan.

Swallows were generally less effective in attack in the second half, but did threaten again four minutes from the end, as substitute Keletso Makgalwa got clear down the right, and his cross was just intercepted by Fielies.

And in the last seconds Makgalwa carved himself another chance, but his shot was pushed away by Marques.