'They are not the number one team in Africa for nothing,' said Desiree Ellis on Nigeria. 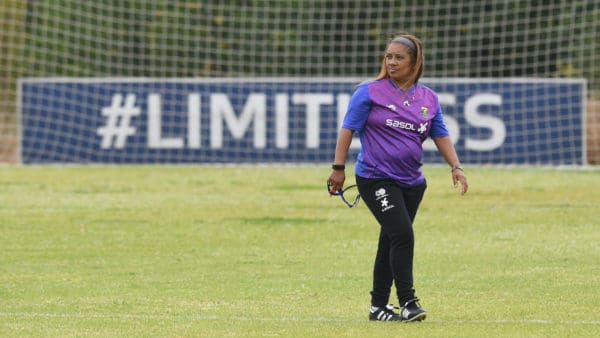 Desiree Ellis is aware of the challenge the Super Falcons will pose to Banyana Banyana. Picture: Sydney Mahlangu/BackpagePix.

A daunting task against Nigeria awaits Desiree Ellis’ Banyana Banyana in their second game of the Aisha Buhari Cup in Lagos, with fireworks expected from this clash.

Banyana and Nigeria are set to renew their rivalry when they meet at the Mobolaji Johnson Arena on Tuesday, with the South Africans and the Super Falcons among the top three women’s national teams on the continent.

The sides last two meetings was in the 2018 Africa Women’s Cup of Nations where Banyana defeated the Nigerians 1-0 in the group stages, before the sides met again in the final with the West African side winning the tie 4-3 on penalties after the game ended in a goalless stalemate.

Now in the invitational where there has been a lot of changes in the two teams, especially in the Banyana squad with a number of players playing abroad, the South African are sure to give the number one ranked women national team a run for their money.

Banyana go into this clash having won their first game 3-0 against Ghana, while Nigeria beat Mali 2-0 in the opening match, and Ellis says they know what to expect from the Nigerians.

“Look, we have more footage of Nigeria playing in other matches, we have to look at all of that analysis, because it is a different opposition. We have to make sure that we get the plan right. Watching them play at home is always difficult – sometimes there is pressure (when playing at home). They scored two goals very late (against Mali), but we know what Nigeria is capable of. They are not the number one team in Africa for nothing. They have shown their pedigree for many years,” said the Banyana coach.

“We have to be on top of our game and make sure we stay concentrated. So, we have an idea of how to prepare and plan. The game against Ghana has helped the team settle more.”