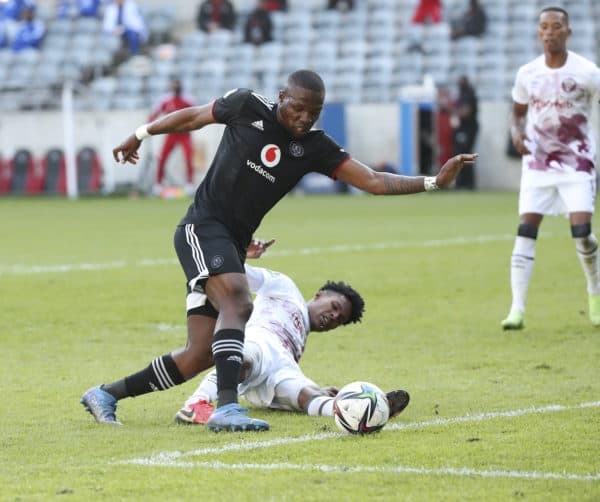 Tshegofatso Mabasa has been given an extra boost after netting twice in two games for Orlando Pirates, after receiving a call-up from Hugo Broos to his 34-man preliminary squad for home and away 2022 Fifa World Cup qualifiers against Ethiopia next month.

ALSO READ: Ncikazi calls for consistency after Mabasa doubles up

It remains to be seen if Mabasa makes the final 23-man squad, which Broos will name on Saturday, but it is clear recognition of Mabasa’s form – he scored Pirates’ winner in a 1-0 victory over Swallows, and followed that up with another strike in a 3-1 win at Chippa United on the weekend.

In the main, Broos has gone for an ‘if it ain’t broken, don’t fix it’ philosophy with his squad, following the four points picked up in Bafana’s first two Group G qualifiers, a goalless draw with Zimbabwe, and a 1-0 win over Ghana.

Kaizer Chiefs’ Njabulo Ngcobo is in the squad, despite his limited game time at Amakhosi so far this season, while Broos has also called on experienced Amakhosi left back Sifiso Hlanti this time, meaning Chiefs’ Sibusiso Mabiliso misses out.

Elsewhere in defence, there are call-ups for SuperSport United’s 21 year-old defender Luke Fleurs, and AmaZulu centre back Tercious Malepe, who were not in the Zimbabwe and Ghana squads, but who have been in excellent form for their clubs.

In midfield, Sipho Mbule, who is carrying a shoulder injury, misses out, but there is a call-up for his teammate at SuperSport Jesse Donn. The 22 year-old has played every minute of SuperSport’s DStv Premiership campaign so far.

All of these players also further speak to the theme of Broos relying on younger talent in his squads.

In attack, Broos has again mainly relied on those who served him well in September, including the goalscorer against Ghana, Bongokuhle Hlongwane and Al Ahly’s Percy Tau, even though he is currently sidelined with a hamstring tear.

Broos says the door is still open for Mosele, Mmodi to play for Bafana
11 hours ago
11 hours ago

Broos says the door is still open for Mosele, Mmodi to play for Bafana
11 hours ago
11 hours ago