Sundowns ready to thrive on pressure against Pirates

'Whether it is Pirates, Baroka, TS Galaxy or whoever, let’s just make sure that we get those points,' said Sundowns co-head coach Manqoba Mngqithi. 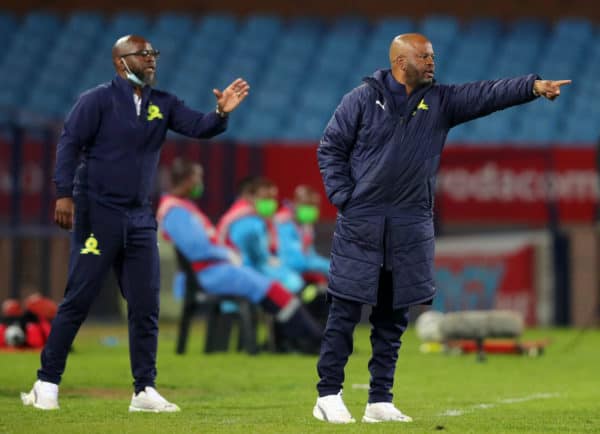 Playing against Orlando Pirates will always be a pressure cooker for any team in the DStv Premiership and Mamelodi Sundowns, as well-oiled as they look, are no exception to this. Two of the biggest sides in the country will meet this Saturday and both come off the back of impressive victories, where they banged in three goals against Chippa United (Pirates) and TS Galaxy (Sundowns) .

Downs co-head coach Manqoba Mngqithi has had to put to bed issues of stress in his camp ahead of the trip to Orlando Stadium, and in doing that, he reminded his players that the prize at the end of the day is always the same, regardless of the opponent.

“We have tried to kill the issue of anxiety by trying to focus more on the process and make sure that everybody understands that three points are the same, whether it is Pirates, Baroka, TS Galaxy or whoever, let’s just make sure that we get those points. The players have responded well over the last games so we cannot start to doubt,” said Mngqithi.

“What we have realised as the technical team is that we have to take care of the process and that speaks to the number of points that we want to achieve. Whoever happens to become an opponent in that space, we focus on that in the space of making sure that we achieve our desired targets and that we get the points that we are looking for. Pirates are that team that must give us those points to help us achieve our ultimate target,” he added.

The Brazilians completed a double over the Sea Robbers last season, and the last time they met in Orlando, Masandawana stunned Pirates with a 3-0 thumping. Be that as it may, Mngqithi knows that the stakes are always high against the Buccaneers but he believes he has the right kind of players to deal with the pressure on Saturday.

“A game against Pirates will always have the elements of pressure … this is most likely to bring an element of anxiety to it and we always have to control that space. Fortunately, the kind of players who we have are those who are used to the pressure of playing for a team like Sundowns.”