Baxter has used all four of Chiefs’ goalkeepers in the six games. 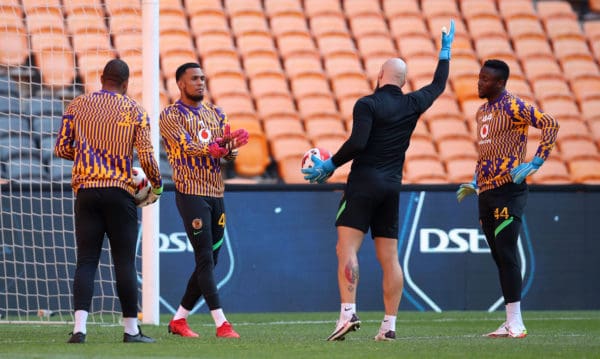 Stuart Baxter’s selection of goalkeepers in his second stint as Kaizer Chiefs coach has rather been a ‘finder finder’ approach.

“We have four goalkeepers who are potential number ones. You can look at the long-term of the club, the assets are Bruce and Brandon. Itu and Daniel give us the experience and we are hoping that they will help and assist in the development of our two younger goalkeepers,” Baxter had said before the Gallants game.

“We have to take every opportunity we can, if all things are equal, to give our younger goalkeepers the experience that will make them senior goalkeepers. That’s where we are.

“At some point, you say well let’s allow them to step back a little bit and give the more experienced guys the shirt in this situation. That’s the rationale behind our thinking.”

Baxter was also satisfied with how Chiefs performed on Sunday, saying it was an improvement from the other weekend’s performance where they were thrashed by Royal AM.

“I think it was a very difficult game for either team to make any headway. I think as I said before the game, I think set-plays were going to be a way of winning the game. I wasn’t happy with our intensity in the first half and with our possession,”  he said after the game.

“I think at times we did perform better. The first 20 minutes against Royal there was nothing wrong. We gave away a silly goal and went on the backfoot and chased the game and lost the plot.

“Tonight in the second half I think we made a bit more progress. We were a bit more solid at the back apart from a couple of set plays where Daniel’s helped us out as their keeper helped them out.

“I think we’ve played more like the way we can play if we’re going to start winning games the longer the game went on. Our possession got sharper, our backline was higher and braver. We got balls into their box, we were threatening whereas for long periods against Royal we weren’t threatening. But we still want to win games. We don’t want to play 0-0.”