City and Swallows meet in the second leg semi-finals of the MTN8 Cup on Wednesday. 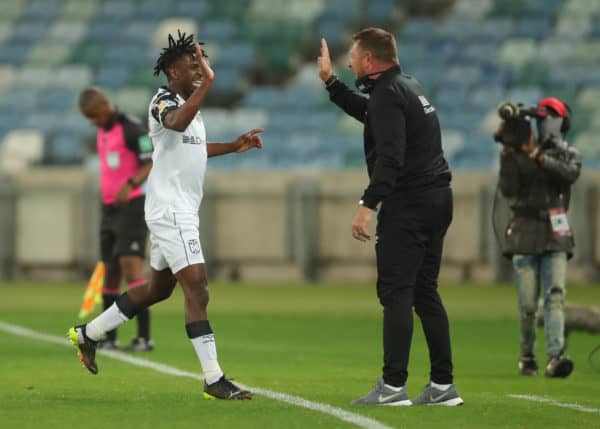 Eric Tinkler has hailed Terrence Mashego’s determination and hard work, which has seen the left-back being selected for the South African senior national team for the 2022 Fifa World Cup qualifiers – back to back matches against Ethiopia next month.

ALSO READ: Swallows to go all out to get the result against City

Mashego has been exceptional for the Mother City based outfit and the call-up to Bafana Bafana, Tinkler believes it is good for the club.

“As a club, we are very happy that our players are making the senior national team. It is good for the club, and of course it is good for the players. Terrence has worked extremely hard to get where he is,” said Tinkler.

Following their goalless draw with Swallows FC last Friday in the DStv Premiership, Tinkler and his charges had to prepare for another meeting with the Birds, but this time around in the second leg semi-finals of the MTN8 Cup at the Dobsonville Stadium on Wednesday.

Leading to this cup match, the Cape City coach reveals that he gave his team some time off last Sunday, but Mashego reported for training by himself, which shows the commitment the 23-years old defender has to improve as a player.

“Sunday was a day off for everyone, except Terrence. He decided to come in and do extra training on his own. He ended up doing it by himself, and that just shows how dedicated and hard-working the young man is.”

Mashego’s dedication will truly come in handy for Tinkler’s team as they go into their third meeting with Swallows, with the sides having also failed to find the back of the net in the first leg of the tournament.

Mashego will be entrusted with keeping the dangerous and speedy Swallows forwards like George Matlou and Dillon Solomons quiet in their search to reach the final of the top-eight tournament.