'I believe it is a moment I will cherish forever,' said the Bafana left back. 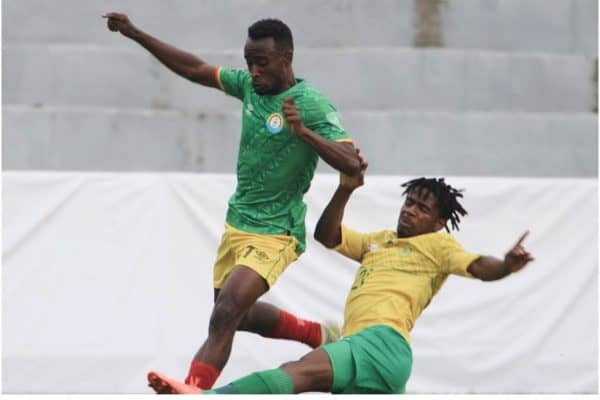 Terrence Mashego (right) will hope to impress again if he gets his chance against Ethiopia on Tuesday. Picture: Kidus Yoftahe/Backpagepix

It may have been a surprise to some that left back Terrence Mashego was handed his Bafana Bafana debut in a game as important as Saturday’s Fifa World Cup Group G qualifier against Ethiopia.

It was not, however, a shock for the Cape Town City man, who overcame a shaky start to thrive in the position in a 3-1 win in Bahir Dar, making it likely that Hugo Broos will select the 23 year-old again in Tuesday’s return match against Ethiopia at FNB Stadium.

“I believe it is a moment I will cherish forever,” said Mashego.

“It was my debut, and as they say, the first time always remains in your mind.

“Personally, it was something I was preparing for even last season, when I joined Cape Town City. I told myself I want to play for the national team. Cape Town City is a very competitive team so playing there is a way to be recognised. When they called me up I wasn’t surprised at all,”

Such confidence was also conveyed to Hugo Broos when the two met at Bafana training.

“The first day I came in he (Broos) called me and told me ‘were you surprised?’ I said ‘no’. He said he was impressed by how I play and said I need to stick to my game and my strengths. The only thing he required is that I think about my role as a defender. It has not been difficult to adjust, for me he is a very good coach,” added Mashego on the Bafana mentor.

“He wants to know you as a person. He asked me personal questions like where I came from, he wanted to know more about me than just football.”

The former TS Galaxy defender added that his experience of playing with the Rockets in the Caf Confederation Cup also helped him cope with the tricky conditions in Ethiopia.

“I anticipated a tough game, because international games are always tough. The experience I gained in the Confederation Cup with TS Galaxy played a big role, in some way it prepared me, because of the travel, and the weather and the food.”

Yet even with this knowledge and self-belief, Mashego admitted to having a nervy start to the match.

“In the first ten minutes, to be honest I don’t know what was happening. Maybe it was butterflies, I made two wrong passes. Then immediately something in my mind switched and said ‘now you are in the game, there is no need to panic, just be yourself and play’. That is when I played my normal game,” added Mashego, who expects another difficult encounter with Ethiopia on Tuesday.

Bafana know that a victory at home will keep them on top of the table heading into the final two Group G qualifiers.

“I believe there is a spot for me (in the starting line-up).

“But what I noticed about the game is that those guys (Ethiopia) were not happy they lost. So we are expecting a very tough game …. the now know our strengths and weaknesses so they will try to capitalise. So what I will try to do is minimise my mistakes, especially the early mistakes I made.”