'My target is to score more goals than I did last season,' said the free-scoring striker after bagging the Player of the Month accolade. 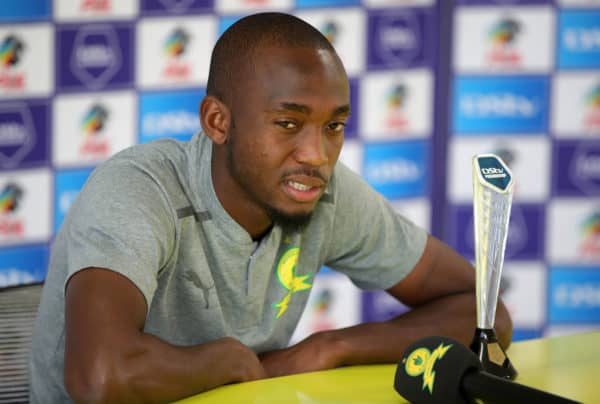 A reigning DStv Premier League Player of the Season who’s carried on where he left off last season with complete serenity, Peter Shalulile is in a class of his own. That is why even if you are not a Mamelodi Sundowns supporter, you cannot help but admire the quality of the Namibian international.

First to receive this season’s DStv Premiership Player of the Month gong alongside his coaches Manqoba Mngqithi and Rulani Mokwena who were named Coaches of the Month earlier today, the ruthless goal-poacher has been the paper in which the two mentors write their starting line-up on and he has repaid them by scoring five goals in six games to take an early lead in the goal scorers chart alongside Victor Letsoalo.

He may be very elaborate in his celebration every time he bangs in a goal but he is one soft-spoken individual, and like many brilliant players alike, he lets his performances do the talking.

The 27 year old described Sundowns’ start to the season as a tough one even “though” they sit comfortably at the summit of the log and are in the final of the MTN8 final.

“It has been a tough season so far, it did not start well but credit to my teammates and coaches who helped me and we kept on grinding and we managed to get to where we are,” said Shalulile, who mentioned that his ambitions are no different from last season’s.

In the previous campaign, he and Bradley Grobler had an exciting finale in the chase for the golden boot where the SuperSport United striker beat him to the coveted strikers’ gong by a single goal. This season he hopes he will be on the podium receiving the accolade, looking to become only the second player to win it twice after Collins Mbesuma.

“My target is just to end on a high with the club in every competition we play in and I hope to score more goals than I did last season. I am still giving my 150% in training and I listen to the coaches and I will continue doing what I did last season. This can be possible [because] we work together in the camp and it is a brotherhood thing. For us it is always to take it one game at a time and we want to do well in every game that we have and it is possible that it could happen this season.”