Meyiwa was gunned down on 26 October 2014 during an alleged robbery at the home of his girlfriend, musician Kelly Khumalo in Vosloorus, Ekurhuleni. 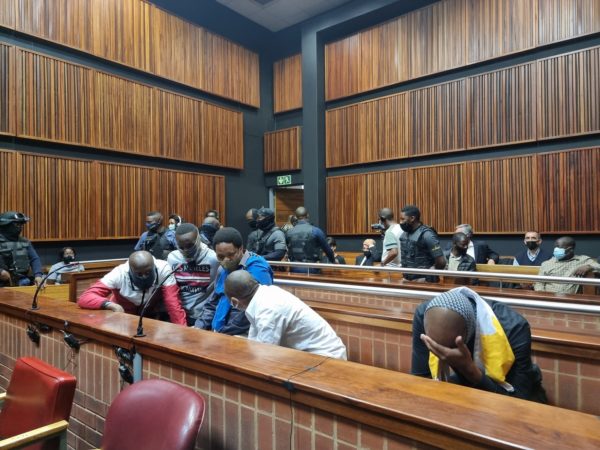 The five suspects on charges of the murder of Senzo Meyiwa appear at the Johannesburg High Court sitting at the Palm Ridge Magistrates Court on 25 October 2021. Picture: Bernadette Wicks

The murder trial of five men accused of killing football star Senzo Meyiwa is expected to start on 11 April 2022.

The accused on Monday made a brief appearance at the Johannesburg High Court sitting at the Palm Ridge Magistrates Court. Their case will now be heard at the Pretoria High Court.

The men were arrested in October last year after years without a single arrest in the Meyiwa case.

Meyiwa was gunned down on 26 October 2014 during an alleged robbery at the home of his girlfriend, musician Kelly Khumalo in Vosloorus, Ekurhuleni.

The men face charges which include murder, attempted murder, robbery with aggravating circumstances, being in possession of a firearm and possession of ammunition. All men remain in custody.

During their first court appearance at the Boksburg Magistrates Court, some of the accused caused a stir when they refused to get into the dock. They claimed that they were innocent and were not involved in Meyiwa’s killing.

In one of the charges he faces, Sibiya allegedly shot a woman more than nine times at a Vosloorus hostel.

Last week, it emerged that convicted KwaZulu-Natal hitman Fisokuhle Ntuli is a person of interest in the Meyiwa case.

Ntuli was convicted on six counts of murder, one attempted murder and four counts of illegal possession of firearms and ammunition by the Esikhaleni Regional Court.

Naidoo said after intensive investigations, police linked Ntuli to the other five murders, including Meyiwa’s killing.

“Ntuli’s terror reign was not only in the northern parts of KwaZulu-Natal as he is also a person of interest in several other cases in Gauteng, many of which are murders, including that of Senzo Meyiwa,” he said.