"We went to a bank and my father had to sign for me", says the legendary stalwart. 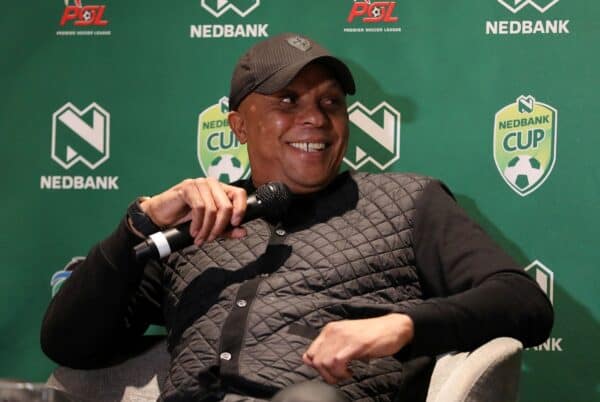 He may have last played professionally some 20 years ago, but Doctor Khumalo remains one of the unforgettable names in the local game.

ALSO READ: AmaZulu are not new to me, says Zambian international Bwalya

Khumalo, or 16V as he was affectionately known during his playing days, remains one of the most talented players the country has ever had.

Some even argue that after him, there has never been anyone with his set of skills and talent. In a recent interview in the Nedbank Reality Football with Brian Mathe, Khumalo revealed what his first pay cheque was.

“My first salary was R8 000, I was still in high school. I thought my life was going to change. I was waiting for the first cheque,” said Khumalo.

“One day, I woke up and I was told we were going somewhere. We went to a bank in Dube (Soweto) and my father (Pro Khumalo, also a former Chiefs star) had to sign for me, although it was my (bank) account.”

He went on to explain that in their days, football was not really about the money like it is these days.

“Overall, out of a 100, it was not all about money; it was 99% passion. We really wanted to be there.” He said Chiefs chairman Kaizer Motaung played a huge role in getting him to understand money and not spend it carelessly.

“My first car came later on… It was not from my first salary. It came years after I started playing. I don’t want to be greedy with the advice I was given, we received the information. We captured it and now it is our turn to share it with the next generation.

“This game is not about you deciding that you will play for 20 years. You can be disciplined, but if the unexpected happens, you could get a serious injury and be forced to quit the game.

“And the next thing you find that you only have the car which happens to lose its value. Investing is the greatest way of living because it means you are wise and you will not be in need.”