Riding high until two weeks ago, Arsenal's season has taken a sudden downturn that has thrown the focus firmly onto the club's plans for the January transfer window. 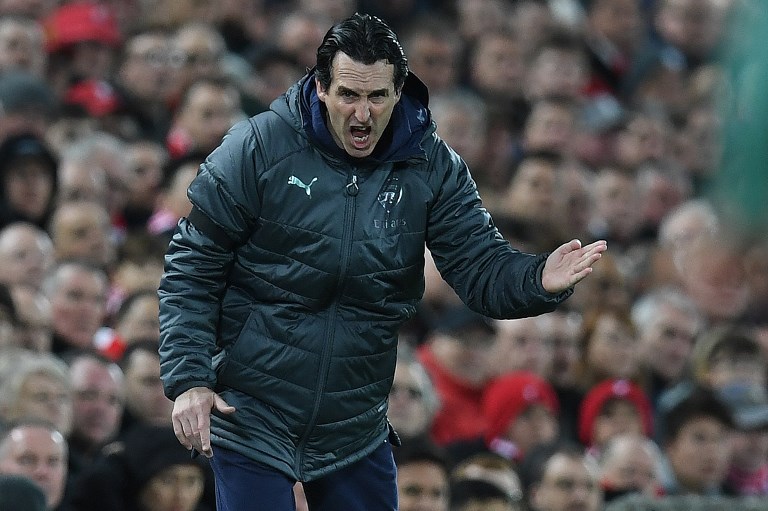 Arsenal's Spanish head coach Unai Emery shouts instructions to his players from the touchline during the English Premier League football match between Liverpool and Arsenal at Anfield in Liverpool, north west England on December 29, 2018. (Photo by Paul ELLIS / AFP)

Prior to the visit to Southampton in mid-December, the Gunners had gone 22 games without defeat and while form had been more patchy since the end of October, the trajectory of Unai Emery’s side was undeniably on the up.

Defeat at St Mary’s Stadium, however, triggered a run that has brought just one win in five games, including Saturday’s humiliating 5-1 defeat at league leaders Liverpool.

With Chelsea winning at Crystal Palace a day later, Arsenal now sit five points off the top four and anything less than three points in the home meeting with fellow London side Fulham on Tuesday will further undermine the club’s hopes of reclaiming a place in the Champions League.

Arsenal have started to appear increasingly vulnerable at the back, a weakness that was ruthlessly exposed by Jurgen Klopp’s side at Anfield.

– ‘Injuries not the problem’ –
The sight of his defenders chasing shadows and failing in their attempts to constrain Liverpool’s thrilling front three will have made painful viewing for Spanish manager Emery and came just three days after Stephan Lichtsteiner’s mistake had gifted Brighton an equaliser in the 1-1 draw at the Amex Stadium.

Injuries haven’t helped with defenders Nacho Monreal, Hector Bellerin, Rob Holding and Shkodran Mustafi all missing the trip to the south coast, while Laurent Koscielny is still feeling his way back to form and fitness after an extended lay-off.

Mustafi returned for the Liverpool game yet while the changes to the back-line have done nothing to help the team establish some stability, Bernd Leno insists injuries cannot be used as an excuse following the Liverpool defeat.

“I don’t think that was the difference,” said the goalkeeper.

“Of course we conceded five goals but I think we as a team made too many mistakes. We have enough quality, even when somebody is injured…injuries were not the problem.

“We have to look forward because we have another important game on Tuesday. It’s the first game of the year and on Tuesday we want to beat Fulham at home. We need to win.”

Arsenal’s problems have not been restricted to their back line, but the frailties suggest Emery needs to bolster his defence in the transfer window.

It’s not a new problem for the club but with Lucas Torreira now offering more steel in front of the back four, there is the possibility to develop a more convincing defensive core.

Meanwhile, uncertainty continues to surround the Arsenal future of Mesut Ozil who has so far failed to win over the new coach and missed the visit to Anfield with a knee problem.

“I don’t know if it’s big or not big, but it’s his knee,” said Emery when quizzed about the playmaker’s absence.

With Alexandre Lacazette also appearing frustrated after being withdrawn at Brighton and then left on the bench at Liverpool, the coming weeks will go a long way towards shaping the remainder of Arsenal’s season.