'We've got a few games left and we have to just remain focused. We wanted a win tonight and we got it,' Scotland striker Lyndon Dykes told Sky Sports. 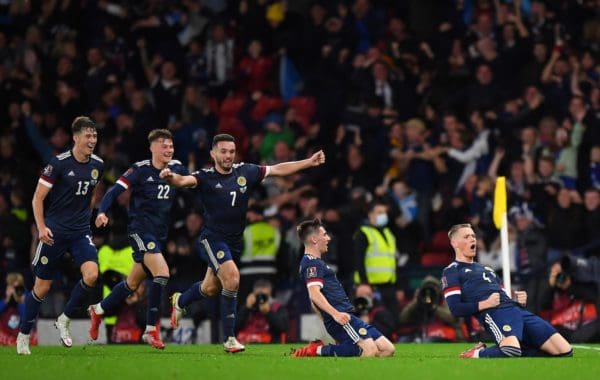 Scott McTominay scored an injury-time winner as Scotland came from behind to claim a crucial 3-2 victory over Israel in World Cup qualifying on Saturday, while England thrashed Andorra 5-0 to stay on track to reach next year’s global showpiece.

The win takes Scotland four points clear of Israel in second place in Group F with three matches remaining as they bid to qualify for the World Cup for the first time since 1998.

Group winners qualify automatically for next year’s finals in Qatar, with the runners-up heading into the playoffs.

Scotland trailed twice in the first half at Hampden Park to goals from PSV Eindhoven forward Eran Zahavi and Mu’nas Dabbur.

John McGinn levelled once, but home striker Lyndon Dykes missed a penalty on the stroke of half-time.

He made amends before the hour mark with an equaliser, awarded after a VAR review after the referee initially disallowed it for a high boot.

A point would have been a decent result for Steve Clarke’s men, but the hosts pushed for a winner which arrived in the 94th minute as Manchester United midfielder McTominay bundled in at the back post.

The Scots still hold a slim chance of topping the group, trailing leaders Denmark, who cruised past Moldova 4-0 in Chisinau, by seven points.

“We’ve got a few games left and we have to just remain focused. We wanted a win tonight and we got it,” Dykes told Sky Sports.

England manager Gareth Southgate rested key players including Harry Kane and Raheem Sterling as his second string impressed in a 5-0 thumping of Andorra.

Ben Chilwell opened the scoring in the 17th minute, with the goal awarded by VAR after initially being disallowed for offside against Jadon Sancho.

Bukayo Saka made the points safe before half-time and Roma striker Tammy Abraham made the most of a rare start by scoring in the 59th minute.

Jack Grealish came off the bench and won a penalty which James Ward-Prowse saw saved, before turning in the rebound.

Grealish rounded off the scoring with a fine individual effort for his first international goal after collecting goalkeeper Sam Johnstone’s long kick.

“It has been a long time coming and it’s about time that I scored because everyone has been saying it to me,” Grealish told the BBC.

“I think that is 16 games now. It was coming and I’m just delighted that I’ve got off the mark.”

It was a busy night for Kateryna Monzul, the first female official to referee an England match, with five yellow cards as well as the penalty award.

England remain four points clear at the top of Group I after second-placed Albania won 1-0 against Hungary in Budapest.

Poland are a point further back in third after seeing off San Marino 5-0 and next face Albania in Tirana on Tuesday.

Sweden moved within a point of Group B leaders Spain thanks to a 3-0 win over Kosovo in Solna.

Alexander Isak scored a magnificent goal to cap a brilliant individual display, with Robin Quaison and Emil Forsberg also on the scoresheet.

Sweden also have a game in hand on Spain, who they visit in their final qualifier next month.

Greece kept their hopes of pushing into the top two themselves alive as two late goals secured a 2-0 win in Georgia.

The Greeks remain unbeaten and are three points behind Sweden and also have a game in hand on Spain.

Switzerland remain close on the coattails of European champions Italy after edging out 10-man Northern Ireland 2-0 in Geneva.

The Swiss are three points behind Italy in Group C with a game in hand and lead third-placed Northern Ireland by six points.

Elsewhere, Serbia moved above Portugal to the top of Group A with a 1-0 win over Luxembourg.

Ukraine ended a run of five straight draws with a 2-1 victory in Finland to consolidate their grip on second place in Group D.

The Euro 2020 quarter-finalists are two points ahead of Bosnia and Herzegovina, who beat Kazakhstan 2-0, and four points behind France.