In a competition where bonus points are vital it will be difficult now for the Highlanders to make the final. 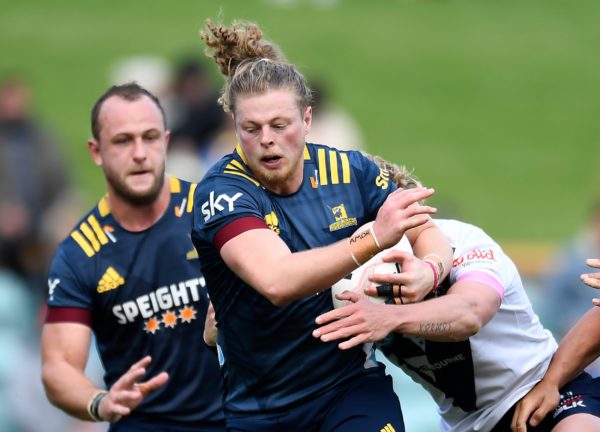 Scott Gregory in action for the Highlanders in their Super Rugby Trans-Tasman match against the Melbourne Rebels. Picture: Getty Images

The Otago Highlanders overcame a Covid-19 disruption to beat the Melbourne Rebels 42-27 in Sydney on Sunday but ended inches short of a crucial bonus point in Super Rugby Trans-Tasman.

Without the maximum points, the unbeaten Highlanders slipped to fourth place, a point behind the Canterbury Crusaders and two points behind the Auckland Blues and Wellington Hurricanes with only two rounds to play.

The Highlanders were forced to make a rushed trip to Sydney on Friday after a coronavirus outbreak in Melbourne prevented the Rebels travelling to New Zealand.

In what became an away game for both sides, the Otago club led 35-27 with four minutes remaining, needing two further tries for a bonus point.

Billy Harmon scored one and in the final play of the game Aaron Smith dived for the crucial try only to lose the ball a fraction short of the line.

In a competition where bonus points are vital it will be difficult now for the Highlanders to make the final although the Blues and Hurricanes still have to face the Queensland Reds who ended the Waikato Chiefs chances of making the top two on Saturday.

“We came here with a purpose and really tried to chase that bonus point and pulled up just short at the end,” Highlanders captain Ash Dixon said.

“I’m stoked we got the win but disappointed we didn’t get that try at the end.”

The Highlanders made a flying start with Michael Collins scoring from a Smith chip kick in the second minute.

Sio Tomkinson followed with a try from turnover ball and Mitch Hunt converted both to put the Highlanders 14-0 ahead.

The Rebels came back with tries to Marika Koroibete and Cabous Eloff, with big prop Eloff’s try coming a minute after he crossed the line for the first time and then admitted to the referee he had knocked the ball on.

A Matt Toomua penalty three minutes after half-time had the Rebels ahead 15-14 but when Jason Uelese was sent off for repeated infringements the Highlanders struck hard.

They turned down the penalty for a scrum which produced a penalty try and followed with tries to Josh Dickson and a solo effort from Jona Nareki to race to a 35-15 lead while Uelese was off the field.

The Highlanders were 5-2 up on the try count and in line for maximum points — a team must score three tries more than their opponents for the bonus — when the Rebels struck back with a try to Matt Gibbon and second five-pointer for Koroibete.

The Highlanders’ late charge could produce only one more try as they fell just short of the vital extra point.