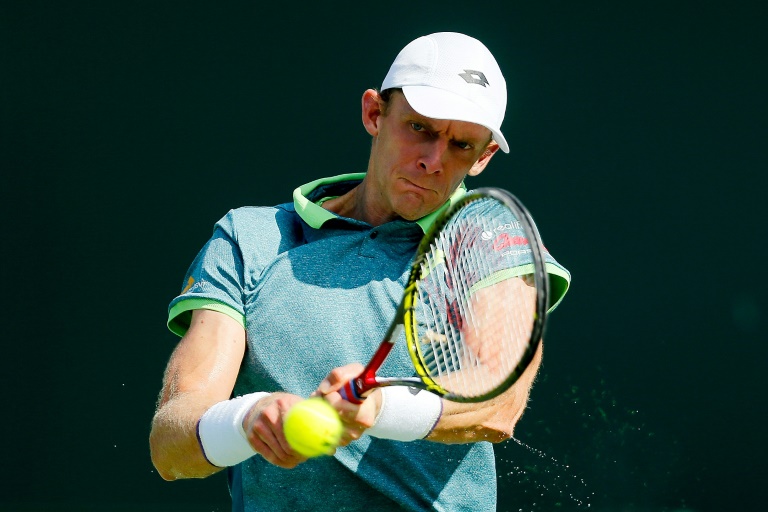 Kevin Anderson of South Africa, pictured in March 2018, has a bye to the second round of the Estoril Open

After taking another step forward in his career at the weekend, with a breakthrough performance at the Madrid Open in Spain, South African tennis ace Kevin Anderson has climbed another rung up the ladder in the ATP world rankings.

Anderson lifted himself one place to a career-high No 7 in the global list which was updated on Monday.

“Going to keep working hard for more. Big thanks to my team and to all the fans for your continued support.”

Though he had previously reached a Grand Slam final, at last year’s US Open, the big-serving US-based player progressed to the semifinals of a Masters tournament for the first time in Madrid, working hard for a 7-6 3-6 6-3 victory over Serbian qualifier Dusan Lajovic in their quarter-final clash.

Anderson, the No 6 seed, was ultimately stopped by Austrian fifth seed Dominic Thiem in the last four, going down in a straight sets 4-6 2-6 defeat.

He was nonetheless delighted to have ticked off another box on his career bucket list.

“I really wanted to break through and be in the semifinals,” Anderson told the event website after his victory over Lajovic.

“It was a goal that I set myself… and it definitely feels good. It was a mini goal accomplished for me.”

Turning out as the No 7 seed, Anderson was set to receive a bye at the Italian Masters tournament in Rome this week.

Having been eliminated in the first round of the opening Grand Slam event of the season, at the Australian Open in January, the SA No 1 was showing good form ahead of the French Open in Paris later this month after reaching three ATP Tour finals and winning the New York Open 250 series title in a superb 2018 campaign.