South African players have made an impact on every division at Wimbledon since Brian Norton reached the men's final in 1921. There will be no Wimbledon finals played this weekend at the All England Club after the 143-year-old tournament was called off for the first time since World War II.

While the women’s final was scheduled to be played on Saturday, and the men’s contest on Sunday, the courts were left empty, with no spectators, no world-class tennis, and no strawberries and cream.

Though fans will have to wait until next year for live action of the grass-court Grand Slam, we look back on some of the most memorable Wimbledon finals featuring South African players.

In the last tournament to be played at the original Worple Road location, Norton’s performance was superb. First, he fought back from two sets down to beat Spaniard Manuel Alonso 5-7 4-6 7-5 6-3 6-3, winning the men’s all-comers’ singles
final.

He then faced American opponent Bill Tilden in the challenge final, with the format at the time requiring the all-comers’ winner to square off against the defending champion for the men’s singles trophy.

A five-time Grand Slam doubles champion, Reynolds holds the distinction of being the only South African woman to have reached the Wimbledon singles final.

Entering the tournament as the No 8 seed, she beat higher ranked players in the quarter-finals and again in the semifinals.

Facing world No 1 Maria Bueno of Brazil in the trophy contest, she lost 8-6 6-0 to take a memorable second place. 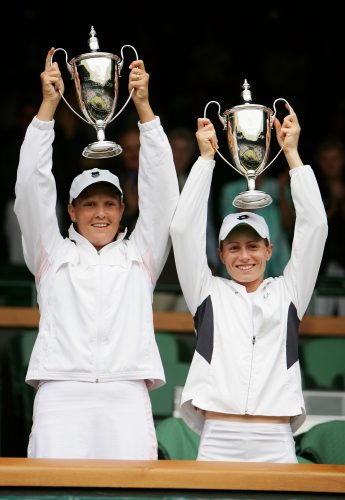 Teaming up with Cara Black of Zimbabwe, Huber became the first SA
player to win the women’s doubles title.

The win was given additional significance when Wesley Moodie lifted
the men’s crown with Australian Stephen Huss, for a rare South African double.

The following year Huber was eliminated in the quarter-finals with
American icon Martina Navratilova, but she linked up with Black again in 2007 as they reclaimed their Wimbledon crown. In another historic effort, Anderson became the first man in 97 years to represent South Africa in the men’s singles final, and he was made to work hard for it.

After beating Swiss legend Roger Federer in the quarter-finals, Anderson had to grit his teeth in a gruelling semifinal against John Isner of the United States.

Eventually taking a 7-5 6-7 6-7 6-4 26-24 win, in a battle that lasted nearly seven hours, Anderson brought an end to the third longest singles match in the history of the game.

Struggling with fatigue, he went on to fall in straight sets to Serbian star Novak Djokovic in the final.