No Wimbledon title for Montjane, but her 2021 goal is still achievable

"I don't care which medal I get, as long as I finish on the podium at the Paralympics, I'll be happy." 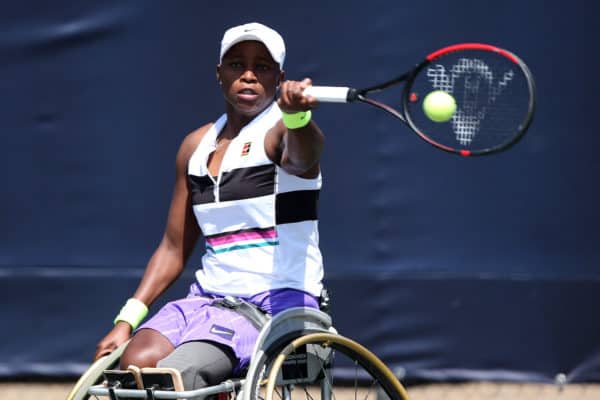 Having faced multiple struggles just to be out on court, when Kgothatso Montjane reached the Wimbledon final last week, she knew she was ready.

The reality is, as much as she wanted to fight for a trophy at the All England Club, and her progress at the prestigious tournament was widely celebrated back home, Wimbledon was not Montjane’s biggest goal of the season.

The 35-year-old wheelchair tennis star wants only one thing from the 2021 campaign: a medal at the Paralympic Games.

And now she knows it is finally within her grasp.

“I took every match at Wimbledon like I was playing at the Paralympics, and I reached the final, so I’m positive that finishing on the podium is possible and that has always been my goal,” Montjane said this week.

Born with a congenital disorder which affected her hands and feet, Montjane overcame her disability to shine on the tennis court.

Climbing to the top of the domestic rankings, she made her Paralympic debut in Beijing in 2008, at the age of 22, and after making her first Grand Slam appearance in 2013, she became a regular at major tournaments on the international circuit.

Having fought her way to the top, Montjane had to be patient in her attempt to challenge for trophies, but her persistence paid off when she made a career breakthrough by reaching the US Open doubles final in 2019.

It wasn’t until this season, however, that the 35-year-old player was able to emerge as a real threat.

Progress at the Majors

After reaching the singles semifinals at the Australian Open and French Open tournaments earlier this year, Montjane made a statement on the eve of the Tokyo Games by progressing to the singles and doubles finals at Wimbledon.

Though she lost both trophy deciders, Montjane made history as the first black South African woman to compete for a Wimbledon title, and her performances boosted her confidence as she prepared to target her first medal in her fourth Paralympics.

“I don’t care which medal I get, as long as I finish on the podium at the Paralympics, I’ll be happy,” she said.

Montjane cut ties with her coach shortly before Wimbledon, but she believed the team around her – including a sport psychologist and a regular hitting partner – would be sufficient to carry her through to the podium in Tokyo next month.

And having fought as hard as she has to give herself a chance at the Games, the experienced player from Seshego hopes she will continue to inspire the youth back home.

“Sometimes you just have to forget about your background and the challenges you have faced,” Montjane said.

“You have to dig deep within yourself and see what you can really do, and if you love what you do, you will excel.”