When executed to perfection, cash-in-transit heists or bank robberies on film can be a thing of twisted beauty. 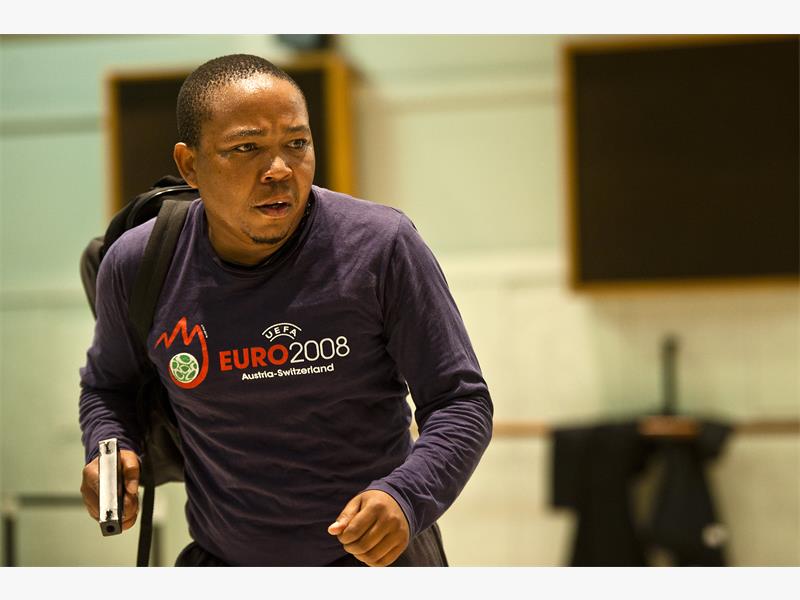 IN MOTION. Acting in Silent Voice requires stamina from the cast, including Presley Chweneyagae.

Films like Heat, Inside Man and The Town implemented complex scenes in this context, and even when things do go astray, the mastermind knows very well that even with good tactics and the ability to improvise, he should be okay. In Reservoir Dogs, Quentin Tarantino explores the thrill inherent in the chaos of a robbery gone wrong, making for riveting viewing. But on the other side is the seldom-told story of the victims involved when these high-risk events take place.

Parallels between film and theatre emerge in Aubrey Sekhabi’s Silent Voice, in which he tackles the theme of heists and those who execute them in a South African context. Sound effects add to an ominous mood in the same way a score in a film would and bongo drums played live help retain the theatrical element of the piece. All the ingredients are in place in Sekhabi’s story: planning, improvisation, paranoia and ultimately betrayal. There’s added drama, too, because Sekhabi has designed the show in a manner that places the immediate audience amidst the chaos of the robbery.

At rehearsals for the play, which opens tomorrow evening, temperatures were raised with the cast not even in their costumes yet, indicating the power of the piece. The cast, which features Presley Chweneyagae, Thato Molamu, Zenzo Ngqobe and Boitumelo Shisana, is high-powered and rather scary onstage.

In the story, four men get together for a thought-out but highly dangerous heist. There follows something of a robbery procedural as the play explores how and why things go wrong and philosophically examines the tattered dreams and beliefs of the robbers. As the play unfolds each individual tells the story of where he came from and the reasons for his current situation.

It’s just a rehearsal, but this is intense stuff. The menace on the actor’s faces and the hurried activity in a situation where characters are terrified is enough to instil fear in onlookers. During robberies, a lot is dependent on quick, frenzied movement, designed to unsettle the targets – or the audience in this case. The chaos of it all creates confusion and in most cases the victims are unable to give concrete clues to the police in the aftermath of the event.

“I wanted to make this play very direct and very impactful,” explains Sekhabi, “so that when you are watching it as the audience you try and put yourself in that space and the characters’ situations.

“At times it seems like we are stealing from the movie tradition, because we invade your space in the production. In a directorial sense the approach was to try and affect the audience as much as possible, and to feel that this thing is really happening. Theatre must affect audience, whether or not they like it. One lady during our performance in Grahamstown said that it was so intense that she thought they were going to start using real bullets. But we also want the audience to enjoy the theatrical piece; we want the audience to say ‘Wow, this story is well told’.”

The emotional and physical intensity of the work certainly takes its toll on the ensemble and a strict physical regimen is followed before rehearsals commence. Emotionally, Chweneyagae spent isolated moments still entrenched in his character seconds after Sekhabi had halted a scene.

“I have to really transform myself when playing Charlie X,” says Chweneyagae.

“He is a very conflicted character and he can take a life with relative ease. The role requires a lot emotionally because he is complex. At one point he is laughing, then he’s crying, and then running. It takes a lot out of you.”

This story for Molamu cuts very close to the bone because as he was growing up his life came to a crossroad and he had to make a choice about the way he wanted to live.

My parents could not pay for my education and stuff like that. I could have been enticed to crime because of my poor background, but luckily I did not go that way and I thank theatre for me making the right decision. It’s a rough choice to make because temptation was there, and this play shows the consequences of the decisions people make.”