Managing its way through the growth cycle was never going to be easy. Now investors need reassurance.

Aspen has been under the spotlight recently as skittish investors dumped the share on speculation that the company was the subject of a report written by the team at Viceroy, which shot to prominence following its publication of damning research into the goings on at Steinhoff.

There are similarities between Aspen and Steinhoff: they are both hugely acquisitive multinational companies with very high gearing and they have both been the subject of investigation by foreign authorities.

Last year Aspen was fined by the Italian Competition Authority for aggressive price hikes in a range of cancer drugs it sells there. But it is a stretch to suggest that this implies it is a business riddled with financial irregularities.

Like Steinhoff, Aspen is very acquisitive and owns businesses in multiple jurisdictions. This is not unusual in the pharmaceutical industry, which has been going through a period of consolidation as regulators up the ante in what is already a tightly-controlled and highly-regulated industry.

Unlike Steinhoff, Aspen generally does not use its shares to fund acquisitions – which means shareholders are not constantly diluted. Since its listing in 1998 Aspen has issued paper just once: it issued 68.5 million shares to GlaxoSmithKlein in 2008 as part of the acquisition price, says Investec Securities analyst Marcelle Jankelow. In addition the group has not done a rights issue since listing, with all acquisitions funded through debt.

At the end of the 2017 financial year net debt stood at R37.1 billion and is expected to rise to R41.1 billion in 2018, before tapering back slightly, according to Investec Securities estimates. “We expect a net debt-to-Ebitda ratio of 3x for 2018 and 2.3x for 2019,” says Jankelow. Unlike Steinhoff, the group does not have any off-balance sheet financing and is highly cash generative.

In 2017 Aspen generated an operating profit of R8.3 billion, of which R4.3 billion dropped down to free cash flow. Also unlike Steinhoff, Aspen is easily able to convert its profits into tangible cash, with a cash conversion rate of 109%, according to Investec.

In an interview with Bloomberg News, Aspen CEO Stephen Saad said that Aspen and Steinhoff are “as similar as A is to S in the alphabet”.

However, while one cannot tar the Aspen management team with the same brush simply because the companies are acquisitive and debt heavy, there are investors who have been skittish about Aspen for some time. They cite concerns about debt levels and the fact that successive acquisitions bulked the company up, but did not deliver the returns – by any metric – that one had come to expect.

In tandem, growth in the share price, once exponential, has slowed over the last three years as Aspen matured and successive acquisitions failed to move the needle in a material way. 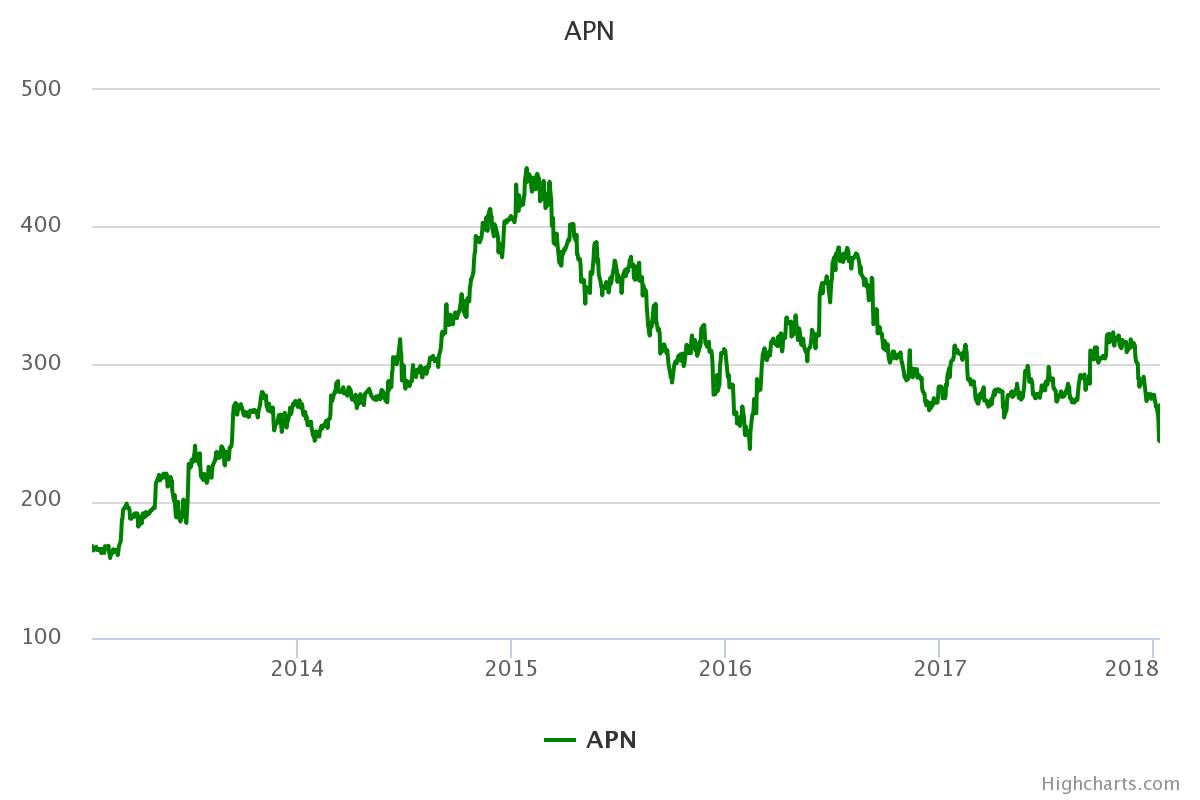 Like Steinhoff, Aspen does not de-segregate its acquired operations from their existing operations, so as a result, the market can’t accurately assess whether the acquisition is adding a return that is greater than the cost of capital. This simply fuelled suggestions that it was making poor acquisitions for the sake of revenue growth.

That said, investors should remember that Aspen made a conscious decision to go global in 2013. It was never going to be easy managing a complex, fast-growing company within a competitive and highly-regulated market. The cost of this rapid growth was efficiency and this was reflected by declining margins, among others. However, Saad and his team have spent the last year focusing on bottlenecks and remedying efficiency problems.

They have had some success in this regard. In the financial results for the year to 2017, the South African business returned to profitability among other small victories. “We are confident that this big push will start paying dividends soon, in fact it already has. Last year’s end of year numbers were very good and cash flows doubled,” says Byron Lotter, portfolio manager at Vestact. “But don’t forget that it is a rand hedge, thus the stronger rand has been negative for its rand earnings.”