All eyes are on whether Sasol Group shares will reach R480, the level at which value could be created for black investors.

The share price of oil and chemicals group Sasol will be closely watched by participants of its black economic empowerment (BEE) scheme Inzalo in the next four months, specifically whether it will rapidly appreciate and hold on to levels above R480.

This figure is crucial as it could bring joy or pain to the 270 000 black Inzalo shareholders who invested in the indebted BEE scheme, launched by Sasol in 2008 to hold 10% of its shares. So far, pain seems inevitable as Sasol shares have rarely held on to levels above R480 in the past three years. 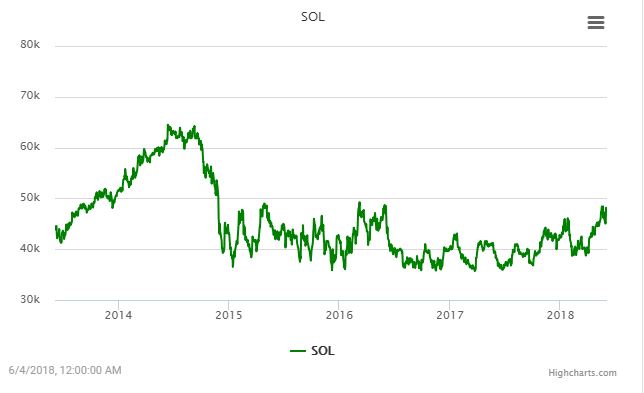 Inzalo investors stand to gain nothing but a paltry portion of dividends in the 10 years they’ve supported the scheme when it matures in September 2018.

Should Sasol’s share price rapidly appreciate to over R480 in the next four months, Inzalo would be able to repay R13 billion debt owed to the commercial banks that have financed investors in the scheme since its inception, and distribute cash to shareholders. To repay the Inzalo debt, Sasol has opted to use its existing cash resources.

Sasol has already conceded that its share price is unlikely to reach the desired levels – thus rendering the scheme underwater.

The Inzalo scheme was structured in a way that the debt accumulated would be repaid through dividends from Sasol and appreciation in the group’s share price. However, Sasol’s share price has suffered from volatile Brent crude oil prices and rand/US dollar exchange movements.

Sasol has paid dividends worth R7.6 billion over the last nine years to Inzalo, of which R5 billion was paid to banks to service debt and the remaining R2.6 billion paid to black investors.

This underscores the dangers of BEE share schemes that are heavily geared and offer black investors with no capital an opportunity to invest in companies whose fortunes are tied to volatile commodities and currency.

Sasol is making a second attempt to deliver value to black investors with its new 10-year R21 billion Sasol Khanyisa scheme, which will replace Inzalo from September.

A big difference is that Khanyisa will be fully funded by Sasol, not commercial banks, and will hold a 25% stake in the company’s South African operations, including its chemicals, synfuels, and gas businesses. Khanyisa investors won’t have exposure to Sasol’s international operations, including its $11 billion Lake Charles Chemicals Project in the US and gas projects in Mozambique.

Unlike Inzalo, Khanyisa will not depend on the Sasol share price to create value, and cash flows generated by the South African operations will pay off the Sasol-provided debt through dividend payments.

There is wide consensus that Inzalo failed to create true empowerment for investors and didn’t meet minimum ownership requirements under the broad-based black economic empowerment Codes of Good Practice.  The big question is whether Sasol’s rebooted scheme will create actual empowerment.

Soria Hay, head of corporate finance at Bravura Capital, reckons so, saying that Khanyisa is expected to remove several risks, including not using Sasol’s share price movements to determine the value of its assets relative to its debt.

“They’ve also allowed this scheme to list on the JSE and get a life of its own after 10 years. Thereafter the shares will be freely tradable between black people, which would give Sasol BEE ownership.”

Sasol announced the implementation of the Khanyisa scheme on Friday, after most existing Inzalo shareholders opted to reinvest their shares into the new scheme.

Sasol has two empowerment structures that trade on the JSE with a different set of shareholders: Inzalo (funded by debt) and Sasol BEE Ordinary shares (known as SOLBE1, and which has no debt). SOLBE1 shareholders have been offered three options: keep their shares on the JSE, participate in Khanyisa, or convert their shares into Sasol shares.

Hay says Sasol has offered the free shares to entice shareholders into the new BEE scheme.

Riaz Gardee, group head of corporate finance at Liberty, points out that Inzalo has allowed more people to participate in the JSE and become active in the investment arena: “It could be argued that a greater awareness, culture, and understanding of the investments arena was created over the last 10 years through this scheme.”