A household using 300kWh a month will see an effective 66% increase in what they spend on electricity, more than five times higher than the 12% increase on the underlying tariff. Many workers have seen their income dry up after a ban Image: iStock

A new fixed surcharge of R200 per month means that City of Joburg residents who use prepaid electricity will see actual increases of up to 66% in the cost of power from this month.

This surcharge will be added to municipal rates bills for July, meaning that residential users will not realise this massive effective increase in their day-to-day prepaid electricity usage. The surcharge does not apply to properties valued at under R350 000.

The City of Tshwane has also introduced a R200 fixed monthly charge from July for both “conventional” and “prepaid” users, “whether or not electricity is consumed”. However, this forms part of a High Court challenge last week by AfriForum.

The Johannesburg’s City Power has also introduced new tiers in its tariff structure, meaning that those users who consume more than 350 kilowatt hours (kWh) in a month will see a significant jump in pricing, without even taking into account the surcharge. Previously, consumption of up to 500kWh a month was at the same tariff.

Any consumption above 500kWh is also subject to a network surcharge of 6c/kWh. The above comparison also does not take into account the effect of the municipal surcharge. Because of the fixed nature of this charge, its impact is outsized on those households who use less electricity. 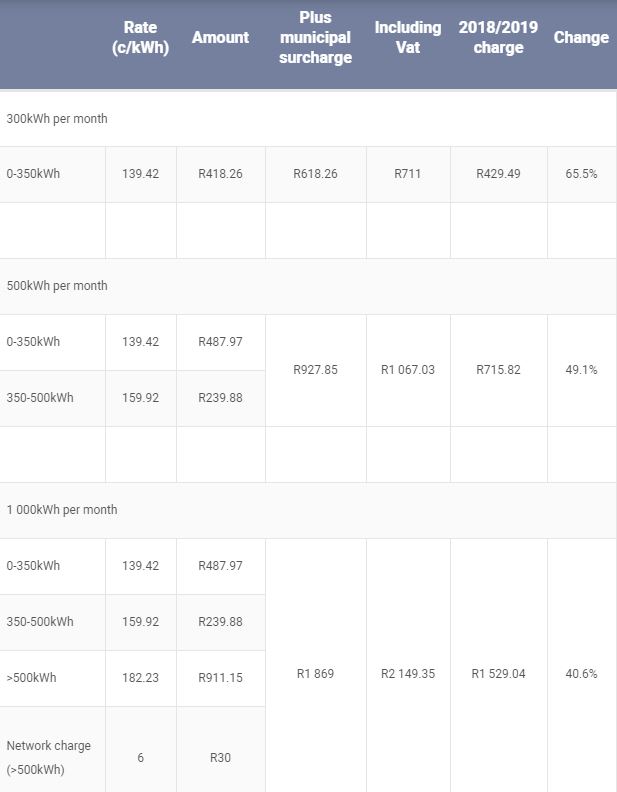 A household using 300kWh a month will see an effective 66% increase in what they spend on electricity, more than five times higher than the 12% increase on the underlying tariff.

Johannesburg and Tshwane have become the second and third major metros to introduce a fixed monthly charge for prepaid customers. Last year, the City of Cape Town introduced a ‘home user tariff’ of R150 per month for prepaid customers whose houses were valued at over R1 million (credit customers paid the tariff regardless of the value of their property). From this month, the Cape Town tariff increases to R163.32.

City Power has not explained the reasons for introducing this tariff, but the City of Cape Town says in an explanatory document that “the service charge helps to maintain the infrastructure of our grid, including power lines, substations, transformers and electricity meters … Some 25% goes toward the maintenance of the grid, 65% to Eskom and 10% to the rates account.”

It adds that: “Due to the decline in usage, it is not possible to rely on electricity consumption to cover fixed costs as this will lead to unequal distribution of costs among the customer base.

Maintaining the ‘incentive’ to save electricity

“A hybrid tariff such as the home user tariff, which has a fixed cost but also looks at usage, will help cover the cost of energy purchases from Eskom so residents still have a financial incentive to save electricity. You will also be protected to some extent from future price shocks as a result of declining sales. Such shocks are a reality and we need to do everything that we can to mitigate against this. Due to the decline, we also need to create more certainty in the income that we get and a fixed cost is necessary to do this.”

Cape Town also points to the “model where fixed charges are recouped separately” already being “implemented by Eskom, Johannesburg City Power, and the City of Mangaung, among others”. It says the “municipality also previously had a service charge until 2011, when it was discontinued as a result of a regulatory requirement” and that in 2016, “Nersa [National Energy Regulator of South Africa] gave the go-ahead for the reimplementation of a fixed charge”.

Joburg City Power is clearly facing similar challenges. In a note to residents, Ward 117 councillor Tim Truluck points to the City Power 2019 Business Plan which states: “City Power has not been able to meet its revenue for a while. City Power used to have a cash coverage of three days and now it is an estimated -33 days. City Power has insufficient funds to meet its financial obligations in the short term.”

Already, City Power’s postpaid/conventional residential customers pay a service charge and a capacity charge each month. From July 1, this ranges between R631.17 and R805.41 per month (including Vat), depending on supply and phase usage. For a basic residential connection (single-phase 60 amp), the increase on the service and capacity charge is 13% from last year.

It is unclear how this separate charge will impact tenants using prepaid electricity in a rental property. Following last year’s implementation by the City of Cape Town, rental property law expert Marlon Shevelew made the point that: “Whether the landlord or tenant is responsible for payment of this additional charge depends on the wording of the lease.

“If the lease states that the tenant shall pay for all electricity consumed at the premises, then I would argue that the landlord must pay — however, it would be advisable in future to amend leases to cater for this charge by stating more specifically which party is responsible for paying the added amount.”

He adds: “Should it be unclear, and the lease states that the tenant is responsible for paying the electricity account, then I would argue that the tenant must pay the added charge. This added charge is set off, to some degree, by the reduced rate per unit.”

The prepaid surcharge for City Power business customers is R402 per month.

* Hilton Tarrant works at YFM. He can still be contacted at hilton@moneyweb.co.za