Taxi industry makes billions, but only R5m in taxes collected

The minibus taxi industry transports two thirds of commuters in SA, and is estimated to have a turnover of over R16.5 billion a year. 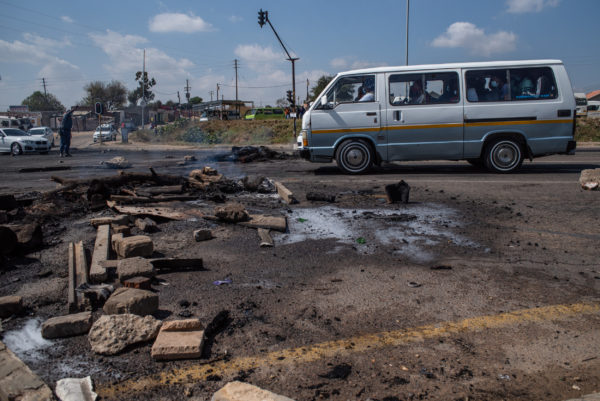 A Taxi drives by burnt remnants of a protest that happened along the R55 in Olievenhoutbosch, 21 April 2021, Pretoria. Picture: Jacques Nelles

Only R5 million in corporate income taxes was collected from the minibus taxi industry in the last tax year, says the South African Revenue Service (Sars).

The ministry goes on to point out that the corporate tax contribution by the minibus taxi industry is in actual fact lower than the R5 million figure, as this amount includes tax collected from the sector’s employment income.

Treasury notes that the industry does not correctly disclose income from taxi business on their corporate income taxes because it its included under a generic income source code.

“We were not able to determine income solely from taxi operations. Our analysis indicates that the majority of the taxi industry is declaring a nil return or are having a refund due to them.”

The minibus taxi industry transports 15 million people or two thirds of commuters in SA, has 20 000 owners and 200 000 employees, and is estimated to have a turnover of over R16.5 billion a year.

The industry, however, gets no government subsidiaries and in June 2020 Transport Minister Fikile Mbalula announced a R1.135 billion relief package to help it mitigate the impact of Covid-19.

Sars under new commissioner Edward Kieswetter is leaving no stone unturned when it comes to getting what’s owed to it though. This includes the taxi industry.

“Sars is concerned about tax avoidance across the tax ecosystem in general; this is more so in this particular industry; to this end, Sars adopting a number of targeted interventions.”

The interventions, however, are more carrot than stick as the revenue service looks to build a tax and customs system that is premised on voluntary compliance.

“The strategic intent is achieved through the creation of clarity and certainty of tax obligations, making it simple, easy and seamless to meet tax obligations and ultimately by creating a credible threat of detection whilst making it hard and costly to remain non-compliant.”

This has seen Sars set up a unit focused on improving compliance among SMMEs (small, medium and micro-sized enterprises), which includes the taxi industry.

Sars has had “various engagements with the industry bodies” in the year 2020/21 to “create alignment as well as to educate”. It has also worked with the Department of Transport to share data on work on their taxi industry transformation agenda.

Treasury says this will be concluded in the 2021/22 financial year.